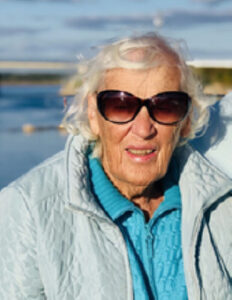 Ruth M. McIntire, 91, of Westport passed away peacefully on Feb. 5.

Born on a dairy farm in Oakham, she was the daughter of John and Josephine Dogul of Oakham, and the youngest of six children. She is survived by her sisters, Irene Giarusso of Barre and Francis Lilly of Centreville, Virginia. Ruth was preceded in death by siblings Anthony Dogul of Oakham, Henry Dogul of Cumberland, Rhode Island, and Helen Gardener of Fort Lauderdale Florida.

Ruth raised her family in Hopkinton and spent time in Westborough and Southborough before settling near the beach in her beloved Westport. She loved sports, especially the Patriots, Red Sox and Clemson Tigers — attending many games in person as a vocal supporter. Ruth cherished time with family, the beach and traveling, and loved swimming and sunbathing. She’ll be remembered as a loving mother and an adoring grandmother.

The family of Ruth McIntire wishes to extend its sincere thanks to the amazing staff at Shrewsbury Nursing and Rehabilitation Center.

Private funeral services will be held at a later date at Pillsbury Funeral Home, North Brookfield. In lieu of flowers, donations can be made to the Alzheimer’s Association: act.alz.org/goto/rmcintire.