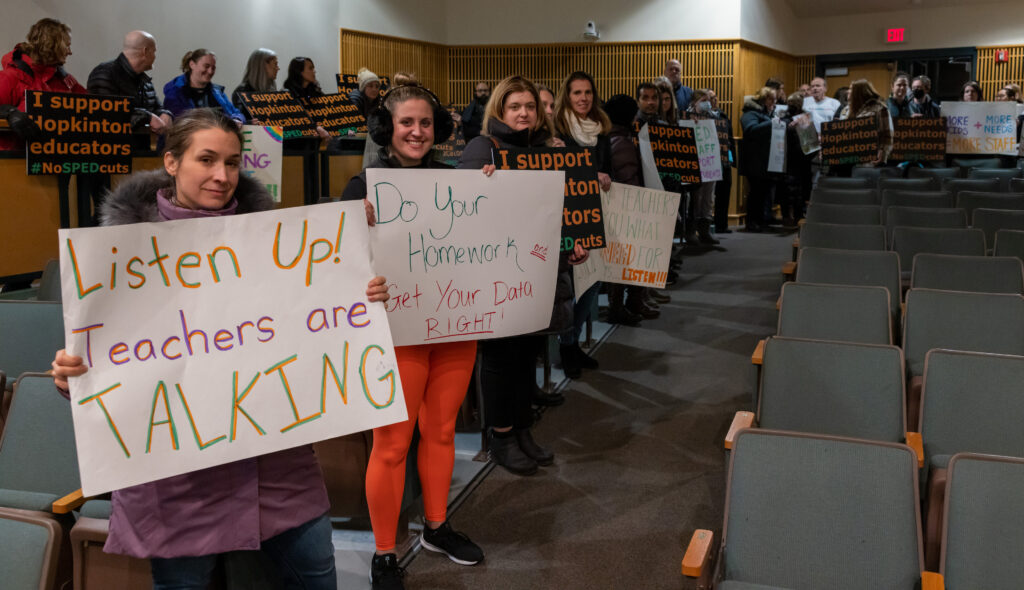 The original plan for reductions had speech and physical therapy services also affected. However, at the last School Committee meeting, the superintendent said the only remaining reduction would be in occupational therapy, going from a suggested cut of 0.8 worth of a staff position to 0.4. The cost for that would be around $32,000.

Parents and educators for the last few months have been attending meetings and speaking out against the proposed plan and warning about the negative impact it would have on student services.

The therapy reduction was the only topic of discussion at Thursday’s joint budget public hearing with the Select Board and Appropriations Committee.

During the budget presentation, Cavanaugh talked about the need for more administrators in special education (SPED), saying that one director for 771 students is “too much” and “off-kilter.” The budget contains requests for a pre-kindergarten director as well as an administrator at the elementary level to offer additional support for specially designed instruction, she said.

Director of Finance Susan Rothermich again provided details about the overall fiscal year 2024 proposed budget of $60,121,087, an increase of 8.3 percent and above the 5.1 percent guidance provided by the Select Board for all town departments.

Speakers at the hearing all talked about the work done by the teachers and therapy providers and the positive impact it had on students. Several people expressed dissatisfaction with the process, saying they felt unheard and unappreciated.

Becky Abate, president of the Hopkinton Teachers Association said that educators have been telling administrators what they need, but it has fallen on deaf ears. She said it has been “insulting, disrespectful and hurtful” to teachers, and she expressed that the students would be hurt in the end.

Among the needs she cited at particular schools were paraprofessionals, learning specialists, a guidance counselor and someone to administer testing.

Abate said a middle school learning specialist had resigned because she couldn’t keep up with the demanding workload.

Several parents spoke about the successes their children had thanks to therapists, while those in the field talked about the complications of SPED scheduling and how their time is spent.

Jessica Bruce, an occupational therapist in the district, said the professionals know how to manage schedules, group students, be flexible and more.

“This is our profession,” she said. “We should be trusted to do the job we are experts in.”

Lauren Passier, a speech/language pathologist, objected to the superintendent’s suggestion that if the speech therapists had extra time, they would be valuable resources working with students on reading and literacy.

Passier said the educators are feeling “crushed and demoralized,” and “morale is shot.”

Cavanaugh noted that she would be meeting with all the providers Friday, and the suggestion was not meant to be “punitive” in any way.

Former Select Board member Mike Shepard spoke about his longstanding commitment to Hopkinton and the great experiences he had with the school district and its SPED department. He encouraged school administrators to improve communication with stakeholders so that they wouldn’t be in this position again next year.

Parent Chris Masters said “unintended consequences” of the district not delivering adequate services could be a lot of parents leaving and enrolling their kids in private schools out of district at a cost of $50,000 to $60,000 each.

He said that kids with disabilities are the most vulnerable people in society: “I think it is shameful to not support teachers and specialists so our most vulnerable are given the best chance to be successful.”

Masters added, “More needs to be done.” He urged the School Committee to find the money and “fire” administrators if they could not get the job done.

School Committee member Lya Batlle-Rafferty, “mom of a SPED kid,” said she totally understands the sentiments expressed by parents. She said therapists act as “sort of a lifeline” and become part of families.

School Committee member Jenn Devlin said restoring $32,000 to the budget is a “small sacrifice to make.” She said that next year, district leaders should “take on a more collaborative process.”

The superintendent said she has empathy for the parents who spoke, but she pointed out that her administrative team had been subject of a lot of criticism and deserved credit, too, for things like helping students for whom English is not their first language, seeing that the buses and food services run smoothly and bringing in millions in grant funding.

She acknowledged the existence of an “us versus them” situation and said she encourages communication and collaboration that goes both ways.

Karen Zaleski, director of student services, said the decisions and proposals were not made lightly and the process was “thoughtful.” She noted that she also had professional background as a related service provider, a building assistant principal and someone who worked with adults with mental health issues/addictions, among other positions.

Zaleski added she still believes the district could operate successfully with the original reductions but is happy to work with whatever staffing levels occur.

Select Board member Shahidul Mannan said he had listened to the speakers’ “feedback from their hearts and pain points,” noting, “How we treat our most vulnerable says a lot about the character of the town.”

He said as leaders, it is important to look at how all this conflict could have been avoided.

He added that he wanted a list of the needs Abate spoke about and wants what is best for children.

Select Board member Muriel Kramer said the district could do without new administrators and instead focus on “the people making the magic happen,” the educators. She said she felt “a little bit of heartbreak” hearing the speakers “trying to convince us they should be valued.”

Town Manager Norman Khumalo said he understood all the frustration expressed as a growing community with limited resources and he is counting on collaboration among all stakeholders to get to a balanced budget.

“There’s a great deal of work going forward,” he said.

In other business, the board approved proposed warrant articles for Annual Town Meeting this spring.

One would use the funds from the 26.2 Foundation and Boston Athletic Association, totaling $144,038, as a partial source of funding for work on the high school track and field.

Another calls for use of Legacy Farms account money for planning, design, engineering, construction or associated costs or expenses related to a Hopkins School addition. Rothermich said the balance in that account is $2,220,058, and the intent would be to deplete that account.

The School Committee awarded the transportation contract to Connelly & Sons, its current vendor. Although Rothermich said five vendors asked for specs, only Connelly submitted a bid.