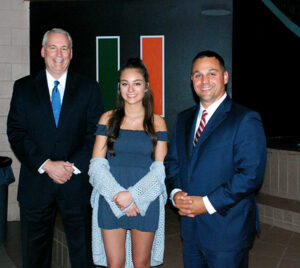 Molly Freshman was named winner of the Blackstone Valley Wealth Management Hopkinton High School $1,000 scholarship, which is presented to a graduating student who demonstrates an eagerness to learn and succeed.

“Determining a winner was a difficult challenge because each applicant had their own admirable qualities,” said James Valis, co-founder of the boutique financial planning and advisory firm located on South Street. “We feel that Ms. Freshman is a resilient and hard-working young woman with much potential for a strong future.”

Hopkinton’s Tess Harvey is headed to Syracuse University to study advertising, but she already has a head start on making a name for herself in the business world.

Last summer Harvey started her own company, called Dress with Tess, which she runs out of her home. Inspired by her mother, who was taking an e-commerce class, Harvey connected with a wholesaler in California and designed a website (dresswithtess.com). She places orders, models, posts the pictures online (with help from her older sister, Olivia, a professional photographer) and sells them — primarily to people in Hopkinton and classmates at Worcester Academy, but also to individuals around the country.

Harvey, who will host a pop-up store at the family barn at 10 North St., on Saturday, June 15, from 12-3 p.m., acknowledged that she has not yet turned a profit, but she’s gained valuable business experience.

“It’s gone pretty smoothly,” she said, noting that she donates leftover inventory to Project Just Because. “Overall I’ve learned a lot dealing with customers, creating relationships with vendors and also some people who buy from me, creating those connections, which I think it’s pretty cool.”

Keefe Tech held its annual National Honor Society induction on May 15, and Hopkinton’s Gabrielle Buentello was one of 17 students inducted.