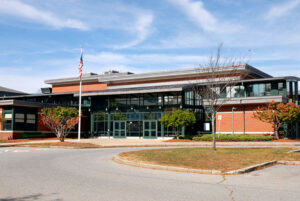 School officials say the high school is in need of expansion, as it is already 30,000 square feet short of state academic standards with enrollment numbers continuing to rise.
PHOTO/STEVE McGRATH

The Hopkinton School District may be looking for more than $16 million in capital requests for FY21.

Director of finance and operations Susan Rothermich presented the preliminary capital 10-year plan during the Oct. 17 School Committee meeting, touching on the major expenses the district will be facing in the near future.

With enrollment exploding over the past few years — an increase of 500 students in the past three years alone — space in the buildings is becoming extremely constrained. The district is waiting for the results of a capacity study to be completed before making formal recommendations, however, one only needs to look in the buildings during the school day to see the need for more space, school officials said.

At the high school, plans would be to construct six additional permanent classrooms at the back of the building, at a potential cost of $5 million. Because money for the design engineering would have to be approved at the May 2020 Town Meeting, the new classrooms may not be completed until the summer of 2021, just in time for an incoming freshman class of 312 students and climbing.

Another big potential expense next year will be roof replacements — both partial and full — at Hopkins and the middle school. The replacement cost is estimated at $5 million for both schools. According to Rothermich, bids will be going out for the replacements in December so that numbers can be firmed up for approval.

An Elmwood feasibility study will cost the district $700,000, but if the district is approved for a new or completely renovated Elmwood project, that cost will be partially reimbursed by the MSBA, Rothermich said.

“Starting early would put us ahead of the curve,” she stated.

Several School Committee members asked if any of the projects could be pushed off past FY21 in order to spread out the capital requests.

Rothermich responded that both roofs are leaking and causing on and off disruption in some classrooms.

“It does not make for a great environment,” she said.

As for the additional modular classrooms at Elmwood and Hopkins, and permanent classrooms at the high school, time is of the essence.

“I think waiting is going to put us where we are not able to offer kids the quality of education that we hope to,” said superintendent of schools Dr. Carol Cavanaugh.

Rothermich added that if the growth in enrollment was happening a little more gradually, the district might have been able to stagger this capital projects over several years.

“[The unprecedented growth] really caught everyone off guard,” she said. “But the students are here, and we don’t see any end in sight to the growth.”

Another concern that the School Committee raised was if the capital plans were taking into consideration future growth.

“My biggest concern is that while this is a huge ask, that it still isn’t going to be enough,” commented Amanda Fargiano.

Rothermich and Cavanaugh said that the district’s capacity study, which should be final at the end of November, will hopefully shed some light on the future needs of the buildings.