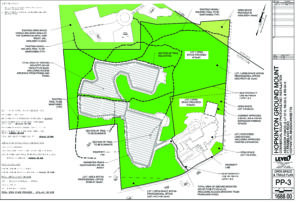 This map shows how Seaboard Solar plans to build its solar array in the woods off Frankland Road.

Seaboard Solar is moving forward with a plan to build a 28-acre solar array in the woods off 71 Frankland Road, although some abutters are holding out hope they can stop the project.

The company has had numerous discussions with the town, including appearances before the Planning Board and Conservation Commission in mid-May, and made adjustments to its plan in an effort to appease the concerns of board members and residents.

The reduction came about because Seaboard Solar agreed to maintain most of the existing trails through the forest, which connects to the Deer Run trail system, managed by the Hopkinton Area Land Trust (HALT). The company also increased the area of disturbance between the panels and nearby residences.

Seaboard Solar is donating about 40 acres of undeveloped open space to the town to be managed by HALT. That land includes trails and a small lake.

The land previously was owned by Liberty Mutual, and the office building on the southeast portion of the property will remain, with Seaboard looking to rent it out.

Among the recent discussions were what type of plantings will be used to screen the panels. This is a sensitive issue, as residents of Charlesview Estates can attest. A solar array constructed off Lumber Street is easily viewable from Alexander Road in Charlesview, much to the dismay of residents there.

Those who use the trails in the Seaboard Solar land and those who abut the property have spoken during the public hearing portion of recent meetings and made it clear they won’t go away easily.

Ann Karnofsky, who lives on East Main Street and walks the trails, also questioned the impact the project will have on wildlife.

“This is the last expansive forest on the east side of Hopkinton, associated with the forest itself and the HALT sanctuary,” she said during the Conservation Commission meeting. “It’s highly used by the public, it does have important wildlife. … I imagine with nine months of noise and construction there won’t be any birds left in there.”

Added Karnofsky: “I don’t think the town should make another mistake, the commission should make another mistake as they did with Legacy Farms, leading to expansion of the school system and numerous things. I think we should not all act as if this will happen, because there will be quite a dissent by people who want to protect the forest as a whole.”

Assuming the project does go through, Seaboard Solar project manager Pedro Rodriguez assured residents that the company’s promises to mitigate the impact of the array will be kept. He noted that the commitments are being included as part of a special permit or a condition in the order of conditions, which means failure to adhere would make the company subject to financial penalties or even shut down.

The continuation of a Planning Board public hearing on the Seaboard Solar project had been scheduled for June 1, but it was pushed back to the next Planning Board meeting on June 22.