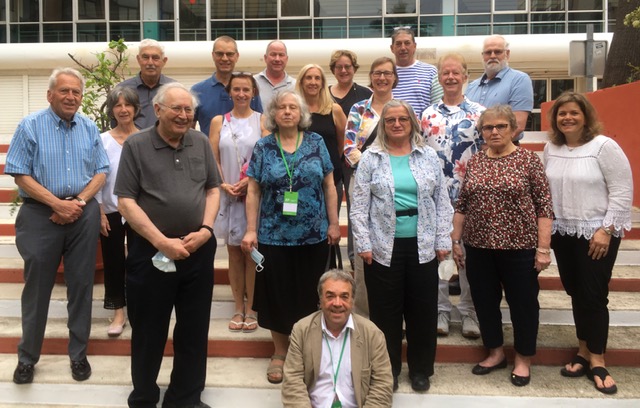 Senior Center chef and French teacher Nathalie Scott led a group of local seniors on a tour of France earlier this year.

It’s often been said that you start growing old when you stop learning. If that’s true, some globetrotting folks at the Hopkinton Senior Center and their chef-turned-instructor-turned-tour guide, Nathalie Scott, will be forever young.

Born in Belgium, Scott made the United States her home in her 20s after marrying a well-traveled American. Not long after settling in Hopkinton in 2019 and with their daughter grown, Scott — a former French language teacher in both public and private schools — decided to apply for the position of chef at the Senior Center.

“I was looking for something part-time, and cooking had always been something I was good at,” she recalled. “Food is so much a part of the French culture! So I applied for the job.”

It was during meals that people began asking Scott to teach them some French. Soon there was enough interest that she started a class.

“I don’t teach like they do in school, I don’t teach about grammar so much,” Scott explained. “It’s more about communication.”

Then COVID hit, and the kitchen closed. However, Scott and her students were able to continue the French lessons online.

“The Zoom classes became a lifeline for many of them,” Scott shared. The virtual group exchanged stories of different cultures, spoke and read French, and made their twice-weekly meetings as much fun as possible — “No grades, just pure laughter!” assured Scott. “And I was so impressed with their determination.”

Two years later, when travel restrictions began lifting, the students asked Scott: “When are you taking us to France?”

Scott lives life to the fullest — not only a wife, mom, teacher and chef, she’s also a painter (specializing in pet portraits, a hobby that started with the dog she adopted from Baypath Humane Society) and can speak four languages. So, this past spring, 20 people ranging in ages from 50s to 80s toured the French Riviera and Provence.

“We visited Nice, Monaco, the Roman amphitheater of Arles, the list goes on. Our guide was fabulous, the food and hotels were amazing and the company was outstanding!” Scott relayed enthusiastically.

One of the best parts, she said, was watching people find new things to like. “I asked them, ‘Please, be open-minded. If you’ve never eaten certain things, France is the place to try them!’ And sometimes, something they tried became their new favorite food!”

“They got to practice their new language skills and really immerse themselves in the culture. They got to see their own culture through a different lens,” Scott said. “And so many of them had wanted to visit France, but they didn’t want to go without someone who understands the language and knows how things work there. Having a social system removed the fear and made traveling fun.

“But also, they got attention. They felt joy. And they learned it’s never too late to discover!”

She noted the seniors weren’t the only ones to gain something from the adventure.

“It made me more aware that senior citizens are a part of society that we need to look out for,” she said. “I have a renewed respect for the elderly. With age comes wisdom, and I was exposed to a lot of wisdom on that trip. The younger generations lose a lot when they lose touch with that.”

The travelers had such a great experience that they want to share it with the public. All are invited to view a slide presentation of their trip at the Senior Center on Aug. 11 at 1 p.m.

“Thanks to Joseph Hall for putting the show together! Most of our travelers, including myself, will be there, too, so people can ask us questions about it,” Scott said. Aspiring chefs also can check out Scott’s cooking demos on YouTube.

Because French lessons at the Senior Center now are in demand, a new beginner class launched in May. The new students will be going on a food-and-wine trip to the Loire Valley in October, when they can enjoy fewer tourists and cooler weather. Stops will include Toulouse, Carcassonne and Bordeaux, among others, with the trip ending in Paris.

Scott’s advanced students still carry their sense of joie de vivre. Next spring, the spritely jet-setters will further expand their horizons and venture to the South of France and Florence, Italy, for more food, fun and learning. The brain is a muscle, she mused, and it gets stronger with exercise.

“What we brought back was not just fabulous memories, we brought back a sense of renewal,” Scott reflected. “This experience changed us, and made us even better than before. They were actually looking younger by the end of the trip!”