Simoes reflects on career after MBCA Hall of Fame induction

Longtime Hopkinton High School baseball coach Steve Simoes reflected back on his decades-long career after earning induction into the Massachusetts Baseball Coaches Association Hall of Fame and realized just how much of the story of his life has revolved around baseball.

Looking around the room when he gave his acceptance speech on Feb. 5, he saw his high school coach, childhood friends, teammates from high school and college, and numerous people he has coached.

“It was a real cross section of people and a lot of lifetime friends,” Simoes said. “But they are all linked somehow through baseball.”

Simoes has won four sectional championships during his years with the Hillers and hit a pinnacle in 2004 when his team finished 24-2 and captured the state title. Hopkinton nearly added a second state championship last spring, advancing to the Division 2 final before falling to St. Mary’s of Lynn.

“The championship games are always special,” he said. 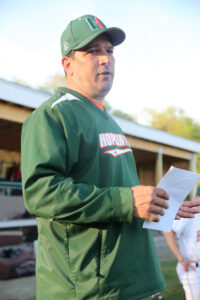 But equally special is the way he has seen the town of Hopkinton change through the lens of coaching baseball through the years. Simoes was inducted along with legendary Hopedale High School coach Joe Small. When Simoes started coaching the Hillers, the school was smaller than Hopedale. These days, Simoes’ teams compete against some of the largest schools in Eastern Massachusetts.

“It shows the transition of Hopkinton, the growth of the town from one of the smallest in the league to now a large Division 2 school,” he said. “The consistency has been that I have always had tremendous kids. That hasn’t changed from the small-town feel to now, I have been blessed with great kids and great families.”

While Simoes can easily recall his team’s triumphs, he also has vivid memories of the early years back in the mid-1990s when the goal was simply to qualify for the tournament.

“I remember our first state tournament game well, from 1995,” he said. “We faced top-notch teams in those games early on and we did really well.”

Simoes coached long enough to coach his son, Stephen, before the younger Simoes went off to Bowdoin College.

“The years coaching my son really stands out,” Simoes said. “His senior year was very special to me.”

During his induction speech, Simoes thanked Keith Verra, a longtime assistant who Simoes called his “right-hand man.” He also expressed appreciation for the sub-varsity coaches who have kept the program strong, and much of his speech was focused on his high school coach at Notre Dame in West Haven, Connecticut, Tom Marcucci, who won more than 500 games leading that school’s baseball and football programs, capturing state titles in both.

“He is the one who inspired me to coach,” Simoes said.

Simoes had a stint coaching at Millis, but Hopkinton has been the primary benefactor of that inspiration through the years.

“It’s definitely an honor,” Simoes said. “When I was preparing the speech, I saw that almost everybody in my life has some sort of connection to baseball. It made me realize how significant baseball has been in my life.”