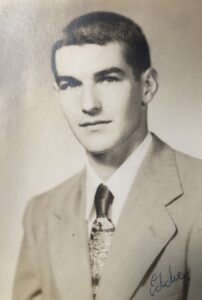 Francis Edward “Skip” Hayward, 88, died April 16 at his home, surrounded by his family. He was the husband of Jean (McSweeney) Hayward, to whom he was married for 67 years. Born in Hopkinton, he was the son of the late Francis “Doc” and Virginia (Fecteau) Hayward.

He was a 1952 graduate of Hopkinton High School. As a member of the football team for all four years, Skip played running back and fell in love with a cheerleader, Jean McSweeney.  Three years after high school, in 1955, Skip and Jean got married. During those early years of marriage, Skip worked at Pyne’s Sand and Gravel.

In the late ’50s, he began what would become a long and highly impactful career at Rosenfeld Concrete. Skip was an incredibly dedicated and reliable employee for the company. During his time with Rosenfeld, the company expanded to become one of the largest concrete suppliers in Eastern Massachusetts and was instrumental to the expansion of the Massachusetts Turnpike into Boston in 1965.

Skip also was deeply connected to the Hopkinton community. He served as an on-call firefighter and plowed for the town during major snowstorms. Skip was an incredibly talented operator, as he was one of a select few who ran the largest snowplowing grater in Hopkinton.

He enjoyed traveling all over the world with his wife and friends. In later years, his hobbies included working with his son, babysitting grandchildren, watching the Patriots, listening to the Red Sox and visiting Foxwoods. He truly loved his family and friends.

In addition to his wife, Skip is survived by his children, Michael Hayward, Diane Hayward, Susan Aitken and husband Gary, and Mary Prescott and husband Michael, all of Hopkinton, Joanne Sables and husband John of Melbourne, Florida, and Susan Roberts of Leominster. He also leaves 16 grandchildren and nine great-grandchildren. He is predeceased by siblings David Hayward, Shirley Clark and William Hayward, as well as sons-in-law Fred Hoskins and Gordan Roberts.

The funeral will be held Friday, April 22, at 9:30 a.m. from the Callanan Cronin Funeral Home, Hopkinton. A funeral Mass will be celebrated at 10:30 a.m. in St. John the Evangelist Church, Hopkinton. Burial will follow at Mount Auburn Cemetery, Hopkinton. Calling hours at the funeral home are Thursday, April 21, from 3-7 p.m.

In lieu of flowers, donations in Skip’s memory may be made to St. Vincent de Paul Society, 20 Church Street, Hopkinton, MA 01748.