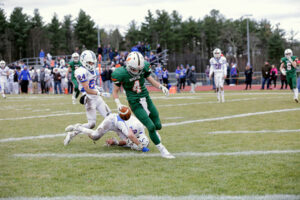 The Hopkinton High School football team handed Ashland its first loss of the season on Thanksgiving morning, cruising to a 26-7 victory at David Hughes Stadium in the annual rivalry game.

Ashland’s starters played just one quarter, as the Clockers wanted to ensure they would be healthy for the Division 6 Super Bowl on Dec. 7 at Gillette Stadium. Hopkinton took advantage, scoring 26 consecutive points after allowing an early touchdown.

Hopkinton, which closed the season with three straight wins, finished at 5-6 and expanded its lead in the Thanksgiving Day series to 53-37-5.

A few days later Saporochetz picked up another honor when he was named Tri-Valley League Defensive Player of the Year. Junior Cole Salyards, who ran for Hopkinton’s first TD against Ashland, was named a TVL All-Star.

In the annual HHS girls football game on Nov. 22, the senior class rolled to a 37-0 victory over the juniors. …

In the 18th annual Tom McIntyre Turkey Bowl, a football tournament featuring HHS alumni from 1994 to 2018, the Hiller Thrillers took the title.

← Independent Thoughts: Sewn with respect — Local veteran receives Quilt of Valor Letter to the Editor: No herbicides in lake →