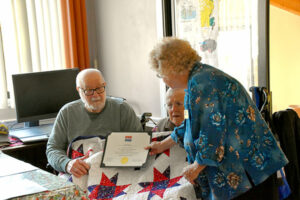 Richard Brault (left) receives his Quilt of Valor from Theresa Perreault as he sits next to his wife, Virginia, at his Hopkinton home. PHOTO/JERRY SPAR

Richard Brault has never talked much about his service in the Marines during World War II.

Occasionally he’ll let a few words slip. One time he shared some brief emotion at the monthly veterans breakfast in Hopkinton.

“Every breakfast they come out with dates of military importance, and one of the Fridays was the anniversary of [the Battle of] Okinawa,” recalled Richard’s son, Thomas. “All he said was, ‘The horror, the horror, the horror. You have no idea.’ If you look back, you read about Okinawa, he saw the Japanese women jumping off the cliffs, people taking their own lives [rather than surrender to the Americans].

On another occasion, a family whose son was stationed in Okinawa brought back some sand from the beach on the Japanese island and presented it to Richard at a veterans breakfast.

Said Thomas: “He took the sand in his hands and he was just shaking his head, ‘You can’t believe what I saw.’ He just remembers and he stays quiet.”

Thomas said his father has always been that way, a man of few words when it came to his military service. He said that’s not uncommon among the Greatest Generation.

“Even my father-in-law, who served in the Army, he never talked about it,” Thomas said. “Talking to my wife about it, when she was growing up they never talked about them serving. It was a job they had to do, they did it, they came back and they started their families.”

“Growing up they never talked about anything. Back then it was taboo, almost — talking about what they saw.”

While Richard might not be inclined to talk very much about what he did and saw, bits and pieces have come out in other ways. One time Richard took Thomas on a visit/reunion to Camp Lejeune in North Carolina. A man walked up to Richard and thanked him for saving his life at Okinawa.

“My father was shooting howitzers from the beachheads,” Thomas learned. “When they were coming down the hill from Okinawa, one of the Marines was bleeding out of his leg. [Richard] took off his belt, tied the tourniquet and waited for the medic — and kept on shooting the howitzer. So the Marine came up to him at Camp Lejeune and goes, ‘I want to thank you for saving my life.’ Back then it was little things like that that saved people’s lives.”

“He’s honored, he’s tickled pink right away, but then it brings back a lot of memories,” Thomas said. “He sits and he stays quiet starting to remember a lot of his comrades, his fellow Marines.”

One of eight children, Richard grew up in New Bedford and enlisted in the Army in the middle of his senior year of high school, inspired by his six older brothers, who served in various branches. Even his sister contributed to the war effort, traveling to Europe as part of the USO. All eight of them made it back home safely.

One of Richard’s final duties as a Marine was to march through Nagasaki after the atom bomb devastated the Japanese city in 1945 and effectively ended the war. At the time, it was not  clear what the potential long-term effects the radiation might have.

Said Thomas: “When he got back to the base, or the ship, one of his sergeants said, ‘By the way, guys, you’re all sterile.’ And he has seven kids.” 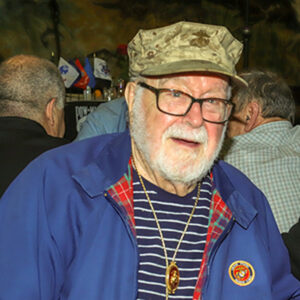 Richard Brault, pictured at the Hopkinton Veterans Dinner on Nov. 11, served in the Marines during World War II. PHOTO/CHRISTINE STRICKLAND

Richard, now 94, has lived in Hopkinton since the early 1960s. He raised his seven children here, working primarily as an insurance agent, and remains in the same home on East Main Street with his wife, Virginia.

A couple of years ago he made acquaintances with Andy Toorock, a former Marine who is affiliated with the Westborough Veterans Advisory Committee. Toorock arranged for Brault to take part in a program called Quilts of Valor. The program, which started in 2003, presents hand-sewn quilts to “cover service members and veterans touched by war with comforting and healing Quilts of Valor.”

On Nov. 6, Theresa Perreault, the Massachusetts Regional Coordinator for the Quilts of Valor Foundation, presented Richard with his quilt during a brief ceremony at his home. She explained that the quilt is designed to be something that he can not only admire but also put to use.

A surprised Richard welcomed the gift.

Added Thomas: “He’s very silent about the honors that he gets. He’s very humble. He knows that he’s the last of his brothers and sisters, so he’s quiet. But he remembers quite a bit.”