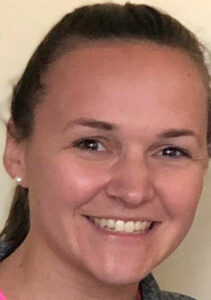 New Hopkinton High School swim coach Kristen Webber was drawn to the program by the team’s sportsmanship and enthusiasm.

Webber used to work as a math teacher and assistant swim coach at Natick High School. Her team shared pool facilities with Hopkinton, and she was first impressed by how the HHS athletes presented themselves. She noticed in the students not only sportsmanship and honesty but also a great sense of community. She received confirmation of her impressions by the Hopkinton coaching staff, which told her how dedicated and hard-working the team was.

“This seemed like a positive environment with a team who was willing to put in the work,” Webber said.

Webber got the opportunity to lead the Hillers after last year’s head coach, Jeff Libby, stepped down due to a job change. Libby will remain with the team as an assistant, along with Karen Terry. Jim Brainerd coaches the divers.

The swimming tradition in the Webber family does not start with Kristen, as her mother, Carolyn, was a swimmer in college at Cornell and was Kristen’s first coach. Webber, who grew up in the Western Massachusetts town of Hampden, was on the town’s rec team from ages 7-18 and remarked how important being part of that community was to her. After a standout career at Minnechaug Regional High School (three-time all-league, three school records, member of the state championship 200-meter freestyle relay team), she went on to swim at Boston College from 2012-16.

Becoming a swim coach was her opportunity to be continue being part of a team.

“I always felt close to my teammates and my coaches,” she said. “I wanted to become a swim coach because I wanted to be a part of a community like that again.”

Webber plans on setting the expectations high for her athletes, to encourage them to challenge themselves and go beyond their limits. Her hope is to show the students that hard work pays off in the end, by guiding them toward improvement, be it in times, techniques or general fitness. Webber also points out that while every student is different, teamwork and support are key to her coaching.

“The team mentality is important,” she said. “I want the team to be willing to take risks and challenge themselves. That requires support from teammates.”

Being able to embrace challenges and take risks is another key aspect of Webber’s coaching style. A willingness to work hard and challenge oneself are the main characteristics that Webber looks for in an athlete.

“If an athlete is willing to embrace challenges, they will find success,” she said. “It is my job to give the athletes opportunities to be challenged and see improvement.”

With swim season about to start, Webber stressed how excited she is to meet the athletes and start working with them. Her hope is that the athletes will enjoy their season while finding the discipline it takes to be successful swimmers. Webber also anticipated that she will have some new workout ideas for the team to try.

“I would like the Hopkinton community to know how excited I am to get to know this group of athletes and how invested I already am in each of their successes,” she said. “I will put in the effort on my end to ensure that each athlete feels valued on this team and finds personal success throughout the season.”