Top of the Hill inductees honored in return to HHS 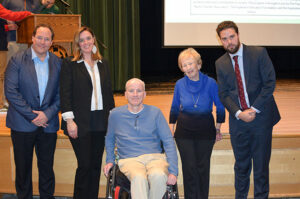 The achievements of five Hopkinton High School alumni were celebrated during the Top of the Hill event on Nov. 26.

Organized by the Hopkinton Parent Teacher Association, Hopkinton Education Foundation and Hopkinton High School, the Top of the Hill program recognizes alumni who have graduated from HHS and have gone on to significantly impact the community — through volunteerism, activism or their life’s work. Nominations are gathered and reviewed by a committee of administrators, teachers, students and community members in order to choose a new group of Top of the Hill inductees.

This year’s inductees were invited back to their alma mater for the day to speak to students about their path after leaving high school.

“It’s hard to know when you get out of school what you want to do, but you work at it and find something that you really like and keep going,” said Jean Scarlata, Class of 1947.

After graduating HHS, Scarlata worked at the Veterans Administration at the Cushing General Hospital complex in Framingham and then continued to work at the VA Medical Center when it relocated to West Roxbury. After taking time off to raise a family, Scarlata spent time volunteering in the Hopkinton Public Schools and taught religious education at St. John the Evangelist Church, for which she currently is the treasurer as a member of the St. Vincent de Paul Society. In 1981 she went to work full-time at the Town of Hopkinton Water Department, from which she retired in 2015.

“I was so nervous,” Scarlata said with a laugh about being chosen as an inductee for the Top of the Hill program in an interview with HCAM TV. “But after I thought about it I knew what an honor it was.”

After spending the day in classrooms, the inductees returned in the evening for a ceremony honoring their accomplishments. Each honoree was introduced by a member of the student council, then they spoke about what inspired their passions.

Missy (MacDonald) Sadler was a star athlete in the Class of 2000. After high school, she attended Fairfield University, where she graduated cum laude with a B.A. in psychology while starting at third base on the Connecticut school’s Division 1 softball team. Sadler worked at EMC Corporation in its sales training program and over the course of 10 years was promoted numerous times and recognized as a top sales performer in the Americas. She also served as vice president of the EMC Field Women’s Leadership Forum, which sought to encourage greater female participation in the traditionally male-dominated tech industry. Sadler currently is taking time off from her career to raise her young family while still being involved in athletics as a volunteer coach for the Medfield High School softball team.

“Some of my fondest memories were made here, in these classrooms and on those athletic fields,” she told the audience during the ceremony. “I built friendships here that still exist today, and now our kids are growing up together.”

Matt Ellam, inductee and graduate of the Class of 2006, enjoyed the opportunity to return to the school.

“The students were great,” he said in an HCAM interview. “It was a great opportunity to hear their stories and share mine.”

Ellam founded the Hiller Grillers, a tailgating fan club that has been grilling since 2004. He is a graduate of the University of Pennsylvania, where he received a B.A. in African studies and history and continued his education at the MGH Institute of Health Professions in 2012, earning a B.S. and an M.S. in nursing to become a psychiatric-mental health nurse practitioner. Since then, Ellam has devoted his academic and clinical time to promoting access to mental health care and substance abuse treatment in underserved and compromised populations and managed nurse-run medication assisted treatment programs for opioid and alcohol use disorders in East Boston and Brockton, and provided comprehensive psychiatric care in English, Spanish and Portuguese at community health centers in Worcester, Framingham and Roxbury. Currently, Ellam sees patients at a group private practice in Brookline while focusing on the growth of various projects to support equitable mental health care for all people regardless of ability to pay or speak English.

Dr. Sam Sennott, Class of 1996, said that it was a “terrific gift” to be able to reflect with the students and share the work that he does serving people with communication disabilities.

“I love kids, and I leverage that with my unique way of thinking,” he said.

Sennott is an assistant professor of special education at Portland State University’s Graduate School of Education. Sennott said he discovered his life’s passion after volunteering at the Michael Carter Lisnow Respite Center. After graduating from HHS, Sennott attended Gordon College, where he received his B.S. in special education, elementary education and history while working a series of jobs assisting children with disabilities. He went on to earn a M.S. in assistive special education technology from Simmons College and a Ph.D. in augmentative and alternative communication, assistive technology and special education from Penn State University. In 2009 Sennott co-created and launched the original Proloquo2Go, an iPhone program that takes on-screen text and reads it electronically. The iOS application helps people who have difficulty speaking due to a range of disabilities such as autism, Down syndrome and cerebral palsy, and has been featured on the front page of The New York Times, by ABC News and on 60 Minutes.

The final inductee was Dr. Patrick Lynch, Class of 1977, who spoke to the attendees about the importance of perseverance. Lynch was paralyzed after breaking his neck playing football for the Hillers.

“I remember feeling guilty in the days and hours and months [after the injury] that I let them down and wouldn’t be able to finish the season,” Lynch said. “It wasn’t so much that I was feeling sorry for myself, it was more a feeling that I was letting my team members down.”

Although confined to a wheelchair, Lynch went on to graduate from the University of Massachusetts Medical School in 1985, completed an internship in internal medicine at Baystate Medical Center in Springfield in 1986, and concluded his education with a residency in diagnostic radiology at the State University of New York Upstate Medical University in Syracuse in 1990. Lynch has amassed an extensive knowledge and unrivaled expertise in women’s imaging, including ultrasonography, mammography and breast MRI. As a radiologist he has dedicated training and unique experience in diagnosing and treating disease and injury through the use of medical imaging techniques such as X-rays, computed tomography (CT), magnetic resonance imaging (MRI), nuclear medicine, positron emission tomography (PET), fusion imaging and ultrasound.