A large contingent of Hillers participated in the New Balance Nationals Indoor girls track meet March 8-9 at The Armory in New York City.

Olivia Jones competed in the emerging elite 2 mile race and ran her second-best time of the season (11 minutes, 10.40 seconds) to place 30th.

The 4×1 mile took 16th in the championship division in 21:56.47. The team was made up of Olivia Jones, Jane Stilwell, Greta Field and Schuyler Gooley, whose 5:06.14 split was the fifth-fastest of any leg on any team.

Gooley also qualified individually in the mile but passed on that race to focus on the two relays.

“It’s become expected that Hopkinton track girls will qualify for nationals each season. They set the bar high. This year was no exception as 10 girls qualified, with several competing in multiple events,” HHS girls coach Jean Cann said. “It’s challenging to run fast enough to qualify for nationals and still extend peak fitness two weeks beyond the All-State Championship, but the girls held their own, turned in some strong performances, and enjoyed the experience.” 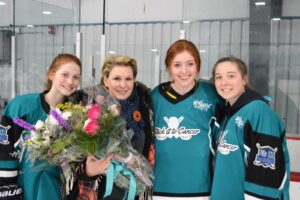 Proceeds from the admission fees, a bake sale, a raffle and direct donations enabled the team to donate $1,800 to the two cancer-fighting groups.

The team’s inspiration for the fundraiser was Hopkinton’s Marie Boyle, mother of team captain Keelan Boyle. After two years in remission Marie’s cancer returned, but her determination to beat the disease inspired the team to spread awareness and raise money for the cause.

The opposing Medway/Ashland players showed their support by wearing teal and white ribbons in their hair.

HHS boys basketball coach Tom Keane recorded his 250th career victory when the Hillers knocked off visiting Wayland in the regular-season finale on Feb. 19. That set up a rematch between the two teams in the opening round of the Division 2 state tournament, and this time Wayland walked out with a win that ended the Hillers’ impressive season.

On the girls side, coach Mike Greco’s team, loaded with underclass players, completed its season at 8-12. The lone senior, Lillian Morningstar, was named a TVL All-Star for the second straight season, while freshman guard Lauren Cho was named honorable mention. 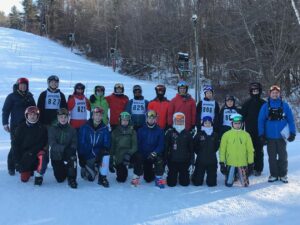 The HHS alpine ski team finished second in its league and sent six athletes to the state championship.

On the girls side, captain Allison Marr, ranked fourth in the league, made her third trip to the state championship, joined by sophomore Cate Barry (8th in CMCSL).

Max Rodgers had the best finish of the HHS competitors at states, taking fourth in the slalom event.

The HHS football program announced that Luke D’Aloia was chosen to play in the 41st annal Shiners All-Star Classic football game, which will be played in June at Bentley University. D’Aloia, the Tri-Valley League’s Most Valuable Player, will play at Colby College in the fall.

Also from HHS football: Kyle Stukel, who was the team’s lineman of the year, is headed to Salve Regina University, Tyler Dougherty, a TVL All-Star, will play at Kenyon College, and Theo Cavallo, one of the team’s captains, will play at Western New England. …
Sophomore wrestler Jake Sokol, competing in the 160-pound weight class, placed eighth in the Division 2 state tournament on Feb. 16. …

The HHS varsity cheerleading team advanced to regionals following a third-place performance at the Tri-Valley League meet on Feb. 24 in Milford.