MacLean set to make his mark with HHS football 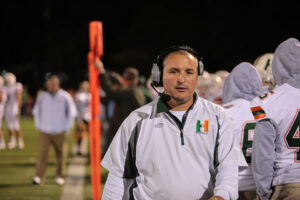 The early lead for the theme song for the Hopkinton High School football team next season? It has to be, “I fought the law (and the law won).”

Not only is new head coach Dan MacLean a Mansfield police officer, at least two of his assistant coaches are members of law enforcement.

“Yeah, we’ve got three cops right off the bat,” MacLean said with a laugh.

MacLean, who previously held head coaching positions at Bellingham High School and Tri-County Regional (a total of nine years), was the defensive coordinator for the Hillers the past four seasons. He takes over for Jim Girard, who earlier this month was named head coach at Lincoln-Sudbury following a successful nine-year stint at HHS.

MacLean, known for his enthusiastic approach, said he does not plan to make major changes to the program.

“I like the way things are,” the 47-year-old said. “I’m definitely going to put in different styles that I do. But I love the way that Coach Girard ran the program.

“These kids are hard-working kids,” he added. “Hopkinton kids are just phenomenal. And it’s great because I’ve been doing the defense, so a lot’s not going to change on the defensive side of the ball. We’ll make some little tweaks here and there, but for the most part the kids are comfortable with it. Offensively we’ll do some changes, but a lot of it’s going to stay the same.

“Me and Jim are two different people, of course, so it might be a little different that way. But on the whole, the program’s in great shape, so I want to keep going with what we have.”

Girard is expected to take a couple of assistant coaches with him to L-S. One coach returning to HHS is Dave Swanton, who recently was selected by the Massachusetts High School Football Coaches Association as one of the recipients of the Assistant Coach of the Year honor.

Chris Baker, who was Medway’s head coach the past three seasons — leading the Mustangs to the Tri-Valley League Small School Division title and the program’s first-ever postseason berth in 2018 — is slated to be the offensive coordinator. Baker, another Franklin native, serves with MacLean on the Mansfield police force.

Another new face is Jack Flynn, who assisted MacLean in Bellingham and then was a Hopkinton assistant for three years before spending last season under Baker at Medway. Flynn grew up in Franklin with MacLean and now is a Franklin police officer.

“Me and Jack have been coaching together for so long that our defensive philosophies are pretty much the same,” MacLean said. “He’ll put his stamp on different things, but on the whole it’s going to be pretty consistent to what we’ve been doing over the years.”

MacLean, who was still finalizing the rest of the staff, said he has long had admiration for the HHS program and is excited to get a chance to take the helm.

“This is something that I’ve always had my eye on,” he said. “Hopkinton is such a great community. Even coaching against it, just seeing the excitement for football. I really believe the town of Hopkinton loves football, and it’s so exciting to coach here. The last four years have just been unbelievable for me to coach here. It’s something I kind of always wanted, and now I’ve got the opportunity. I’m ecstatic about getting the job.”

“We are thrilled that Coach MacLean will be the new leader for Hopkinton football,” King stated. “He has been an integral part of the team’s growth and success over the past four years. The energy and new ideas he will bring to the position coupled with his big-picture understanding of what the high school athletic experience should be for a student-athlete truly distinguish him. You will not meet someone more passionate than Coach Mac, and that passion is contagious. Most importantly, Coach MacLean is an outstanding person who coaches for all the right reasons — to instill a love for the game in all of his players and to make a positive, lasting impact on every member of his program.”

MacLean, who had his first meeting with the players as head coach on March 13, takes pride in getting his team fired up to play.

“That’s one thing that I kind of put my stamp on — a lot of excitement,” he said. “I’m one of those guys that I love motivating the kids and I love getting them excited. I think they know that from being with me for the last four years. We’re getting a lot of excitement going.”