The two candidates are vying for the seat formerly held by Carolyn Dykema (D-Holliston), who stepped down in February to take a job in the private sector with clean energy company Nexamp. The district includes Hopkinton, Holliston, Sherborn and part of Millis. There are almost 50,000 residents in the district, with a median household income of $151,303.

This is the first time since 2014 that there has been a contested race, as Dykema held the seat since she was first elected in 2008.

In interviews with The Hopkinton Independent, both candidates spoke about their passion for public service and how their skill sets allow them to approach the job in different ways.

Why are they running?

Barnes said she decided to enter the race late as a Republican because she wanted to “give people a choice” other than Arena-DeRosa and his preliminary rival, Connor Degan, Hopkinton’s town clerk.

“Both candidates said they were running on a Democratic Party platform,” she said. “The district is only 25 percent Democrat, so you’re already telling people like me that I don’t matter.”

She added that she is looking to “find balance” in government in a way she experienced in the corporate world.

“I am not a professional politician,” she stressed, noting that Arena-DeRosa previously has run for statewide office. “I think there’s a distinct difference in approach.”

Arena-DeRosa said he was inspired to pursue a career in public service at an early age, particularly because of his mother. His involvement in Holliston’s town government and community activities led to his entering the race.

“I grew up in Walpole in an activist home,” he explained. “We had Freedom Riders, environmentalist meetings and hunger walks. I got exposed to all of that stuff.”

He was trained in community organizing by the United Farm Workers union by the son-in-law of activist Cesar Chavez, he explained. He has utilized this knowledge in his roles in local, state and federal government work as well as social justice advocacy. 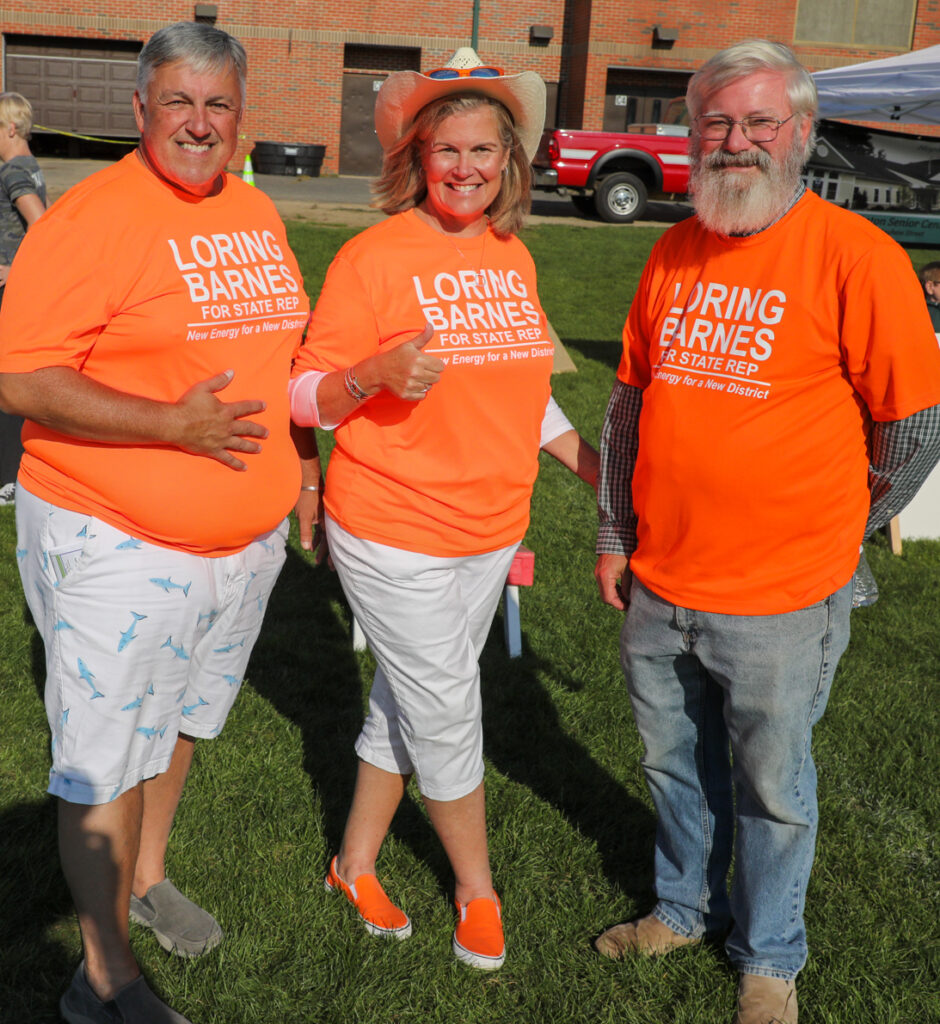 “I’ve got this wide breadth of experience that I think would be invaluable if I were to serve as a state representative,” Arena-DeRosa said as he explained some of the major roles he has held. “I haven’t served in one specific area, but I’ve touched on a lot of them.”

One was as the advocacy director for Oxfam America, building bridges between Congress, the White House and state legislatures. He also served for several years as the New England director for the Peace Corps.

He was asked by the Obama administration to be the Northeast Regional Administrator of USDA Food and Nutrition, a $12 billion federal agency that focuses on areas such as food insecurity, education and agricultural issues. This experience allowed him to work with farmers, food processors, environmentalists and small business owners on issues such as water and land use regulations and disaster relief.

For Barnes, one career highlight was when she was the marketing and communications director for the MBTA for three years between 1992-95. She was responsible for creating the memorable slogan and campaign, “T … The Alternate Route.” In this role, she also wrote speeches for federal and state officials as well as congressional testimony.

“Public relations is not just about publicity,” Barnes explained. “It’s about bringing organizations and people together and creating some bond of common understanding.”

This is a philosophy that she said is encapsulated in her main campaign slogan: “It’s about all of us.” She affectionately referred to her volunteers as “Team Orange Crush,” noting her orange campaign signs.

During Boston’s hosting of the World Cup soccer tournament in 1994, she was able to partner with corporate sponsors to get the logo use rights for her “soccer train” concept and also spearheaded a volunteer multilingual concierge program. This led to Boston’s being considered as an Olympic site, she said.

As a Millis Select Board member, Barnes said the town had been facing the need for several major capital improvements, including a new police and fire station, a modern library and a school. She advocated for funding those buildings as well as for the change of name to Select Board.

“I made a big difference as a Select Board member,” Barnes said, noting she also started the town’s Economic Development Committee and introduced performance-based contracts. “I brought a lot of new ideas to the town.”

Arena-DeRosa also has served in local government as chair of the Holliston Democratic Town Committee and an elected member of the Holliston Finance Committee. He helped create the MetroWest Democratic Alliance as well. He has coached Little League baseball and has helped with community arts and music events.

“I am sometimes asked if I see myself as a local rep or a state rep,” he said. “But it’s both. If you want to be effective, you have to embed yourself and immerse yourself in the local issues of the people you serve and then translate that into a Beacon Hill context.” 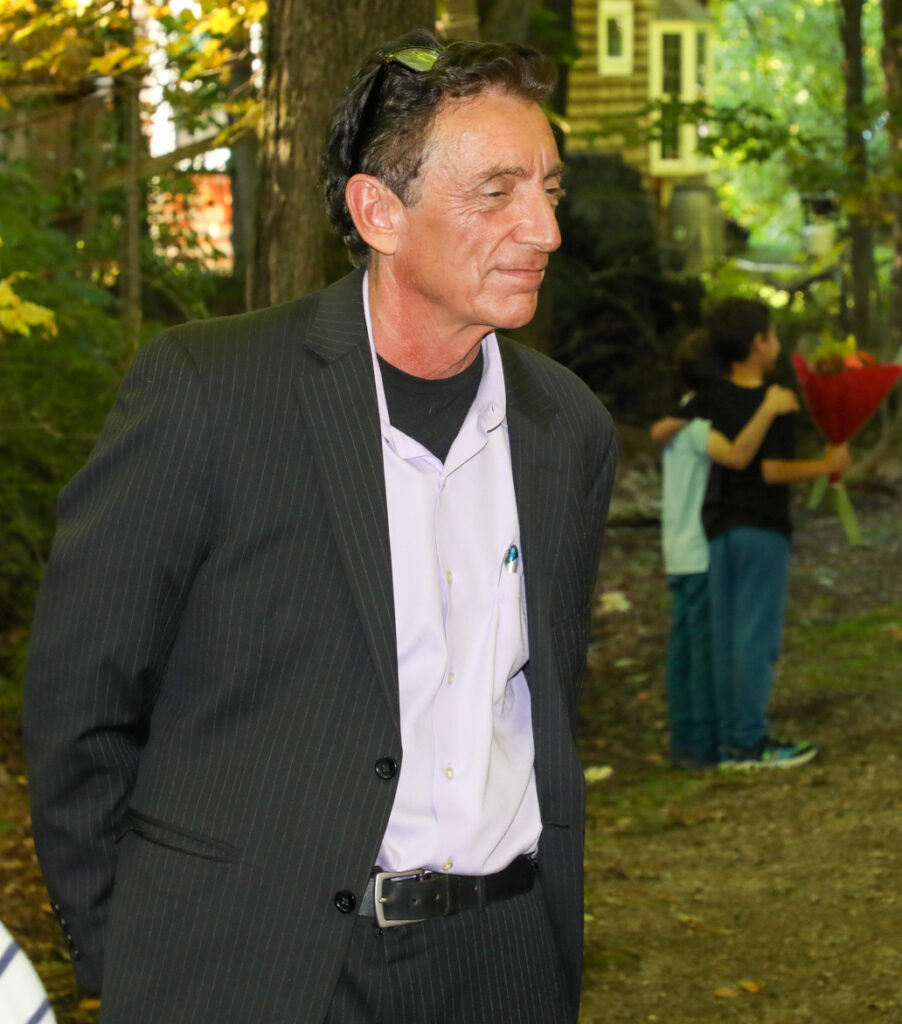 James Arena-DeRosa takes in the Art on the Trail unveiling earlier this month in Hopkinton. PHOTO/JOHN CARDILLO

One issue on which the candidates agree is the belief that small towns are being overlooked by the Legislature.

“Too many times I look at things and say, “Oh, nobody from a small town was sitting at the table when that was decided,” said Arena-DeRosa. “There’s got to be more consideration on how policies affect smaller communities.”

Barnes lamented that there was no special election to fill the seat when Dykema left, causing a vacuum in representation for the area.

“I am running to be an advocate for small towns,” she said.

Both candidates said an issue that will severely affect their potential constituents is the MBTA Communities Act, an unfunded state mandate calling for the creation of multifamily housing near transportation hubs. While Barnes attributed part of the decision to “one-party voting,” Arena-DeRosa called the policy “a rush job by the Baker administration.”

Another issue where the candidates see common ground is that the four towns in the district are becoming increasingly expensive in which to live.

“I talk to seniors who are worried about getting priced out of their homes because their tax bills are getting too high,” Arena-DeRosa said, also noting the need for affordable housing. He said state budgets should incorporate growth projections to better serve fast-growing communities like the ones he hopes to represent.

“Seniors are the ones who have been paying the taxes and writing the checks for years that benefit the schools and libraries,” Barnes explained. “Why aren’t we doing something for them?”

As a state rep, one initiative she would advocate for is a matching fund for senior services similar to the one the state has for schools and libraries. She’d also like to create a concierge program to help elders navigate the healthcare system. She noted the popularity of the Hopkinton Senior Center and would like to see its concept replicated in other towns.

Water management is another central issue for both candidates.

Arena-DeRosa spoke about the unfunded mandate regulating PFAS in the water system, an issue that has been of great concern in Hopkinton because of the elevated PFAS rates detected over the past several months.

“The state puts the regulation into effect in 2020,” Arena-DeRosa explained. “But the funding to implement it won’t be available until 2023, ’24 or ’25. It’s up to Hopkinton to decide how to solve the problem, but the state should be able to help them.”

Barnes said that she would have used some of the state tax surplus money slated to be returned to taxpayers for community improvement projects such as Milford’s water treatment facility and similar programs in this district. She said she would bring experts to the table to see if there was a potential for hydroelectric power and water recapture as more roads undergo reconstruction.

Both candidates are proponents of green energy, but each noted that fossil fuels are currently used in sustainable energy production.

Arena-DeRosa called the environment “the seminal issue of our time.” He would like to see the state get to net zero by 2050 but added there should be underlying measures put into place to aid the transformation to hydroelectric and solar power that will create high-paying jobs.

While Barnes said she is a proponent of green energy initiatives, she noted that batteries and wind turbines are created with fossil fuels.

“People just think you can flip a switch and everything is going to be different,” she said. “It’s not going to happen that way. And that’s why I think we have to be transparent.”

Barnes and Arena-DeRosa have different perspectives as to where the $2.94 billion state budget surplus money set aside for taxpayers should go.

“I think we have to honor the law the way it was passed,” Arena-DeRosa said. “That part of the surplus should go back to the people in the way it was structured. If we want to change that next time, that’s a different discussion.”

He added that he supports the $2 million exclusion on the estate tax and the sale of businesses.

Barnes disagreed, saying that the money should have been returned to the communities for needed infrastructure projects.

As a small business owner, she called the Fair Share Amendment ballot question “unnecessary.” “I don’t get anything more for it,” she noted. “Our economy is 99.5 percent small businesses, and I think people really appreciate someone who speaks that language.”

Among the other races Hopkinton voters will help decide is U.S. representative. The town currently is represented by Jake Auchincloss (D-Newton), but after redistricting the town will vote in the second district, where incumbent James McGovern (D-Worcester) is being challenged by Jeffrey Sossa-Paquette (R-Shrewsbury).

There also are four ballot questions facing state residents. Question 1 could create an additional tax on income over $1 million. Question 2 deals with the regulation of dental insurance. Question 3 concerns a proposal to increase the statewide limits on alcoholic licenses. Question 4 addresses the removal of proof of citizenship to obtain a driver’s license.