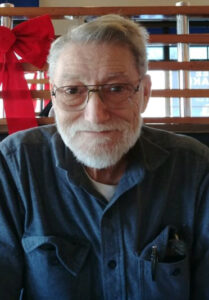 Stephen Mark Gilbert of Salem, formerly of Newton and Hopkinton, passed away Nov. 5 after a lengthy illness at the age of 70. He was the son of Belle Gilbert Barron (z”l) and Manny Gilbert (z”l). He is survived by his sister, Laurie Gilbert Albert (David Albert), nephews Josh (Mandy) Albert and Daniel Albert, and niece Elizabeth Albert, the Barron/Glazier stepfamily, former wife Sarah Lesher, many friends, and his canine companion, Bogart.

Steve was a former WCRB announcer and engineer in the 1970s, owner of the Newton Copy Shop for 28 years, and most recently an electronics engineer for CPI. Steve was a ham radio enthusiast (K1SG), classical music lover, dog rescuer, great friend and all-around nice guy.

A private funeral will be graveside at Sharon Memorial Park. Arrangements are under the care of the Levine Chapel in Brookline. Due to COVID restrictions, an online shiva will be planned soon.

In lieu of flowers, donations in Steve’s memory can be made to Baypath Humane Society or Massachusetts General Hospital.