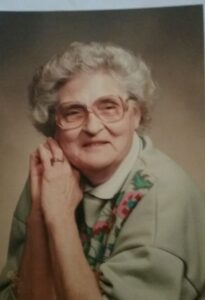 Thelma C. (Brown) Vorce Kerivan, 94, of Hopkinton, died peacefully on Feb. 9 at the Kathleen Daniel Nursing Home in Framingham. Born in Natick, she was the daughter of the late Hazel (O’Leary) and Charles E. Brown. She was the wife of Frank L. Vorce, who died in 2003, and James A. Kerivan, who died in 1995.

Thelma was the oldest daughter of 13 children. She is survived by three sisters, Betty Garvin of  Florida, Ruth Doherty of Andover, and Marilyn Fabri of Framingham, and one brother, Jerry Brown of Natick. She was predeceased by sisters Phyllis Allen McClure, Barbara Gassett, Virginia Libby and Joanne Corey, and brothers Edward, Bobby, Ray and Charles Brown Jr.

Thelma attended Faulkner School of Nursing and worked many years helping others. She worked at the Framingham Newsclip for years. Thelma “Brownie” loved talking with people, whether it was riding the Framingham bus, walking downtown, or standing in a line. She had a quick sense of humor and could easily laugh with others. She loved her pet cats, bowling and square dancing, and was an avid reader. In 2006, she was baptized into the Woodville Baptist Church.

She leaves behind six children: Ron Vorce and his wife, Audrey, of Hopkinton; Kathy Tooley and her husband, Jim, of Holliston; Tom Vorce and his wife, Stephanie, of Hopkinton; Robert Vorce of Marlborough, Debbie Hogan of Hopedale, and Joe Vorce of Vermont. She was predeceased by her son, Donald Vorce, who died in 1996. She had many grandchildren and great-grandchildren, and one great-great-grandchild, as well as many nieces and nephews.

A funeral service was held on Feb. 15 at the Chesmore Funeral Home of Hopkinton (ChesmoreFuneralHome.com), followed by a private family burial. In lieu of flowers, donations may be made to Friends of the Hopkinton Seniors, in honor of George Robinson, 28 Mayhew St., Hopkinton, MA 01748.