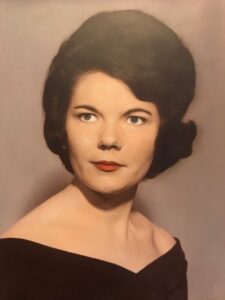 Theresa (O’Flaherty) Coccoli, age 85, of Uxbridge and formerly of Sudbury and Carraroe, Ireland, died at Golden Pond Assisted Living in Hopkinton on Dec. 10 after a period of declining health.

Theresa was born on July 21, 1935, to the late John and Margaret (McDonagh) O’Flaherty in the small east coast town of Carraroe, in County Galway, Ireland.

Theresa and Joseph David Coccoli were married on Nov. 20, 1965, and she was his devoted wife for 55 years. They had two daughters, Fiona and Shauna. They enjoyed visiting family, spending three weeks every year at Theresa’s family home in Carraroe, Ireland.

Theresa graduated from Stoke Mandeville Hospital in London (nursing school) in 1958. In 1963 Theresa responded to an advertisement for a need of nurses in the United States, and she found much success working in various Boston-area hospitals. She met her husband in Boston, where he worked as a physicist at Draper Laboratory. Theresa was loved by the people and families she cared for.

Theresa was a devout Catholic who enjoyed reading books and reciting Irish poetry from memory. She was fluent in the Gaelic language, and she loved animals and gardening. Theresa enjoyed her time with her three grandchildren and visits from her four-legged friends. Theresa especially loved her daily visits from her husband, Joseph, while she was at Golden Pond Assisted Living. They would walk around the pond, sit at their favorite bench and watch the herons.

In addition to her husband, Theresa is survived by her loving children: Fiona Lyons and Shauna Schwartzman and husband Bruce; her grandchildren: Devin Lyons, Kelsey Lyons and significant other Devin Pilkington, and Kayla Lyons; her 1-month-old great-grandson, Finan Paul Pilkington; her sister, Barbara Mulligan, and many loving nieces and nephews in Ireland.

In lieu of flowers, the family suggests donations in memorial in Theresa Coccoli’s name to Alzheimer’s Association.

Funeral services will take place when it is safe to do so with close family.

Arrangements are being handled by Buma Funeral Home in Uxbridge.