Timlin race to be virtual again in ’21 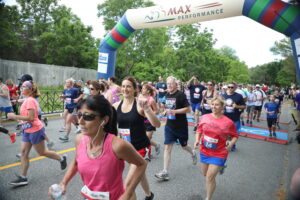 Runners head out at the start of the Timlin 5K in 2019, the last year the race was held live. FILE PHOTO/JOHN CARDILLO

Organizers of the Sharon Timlin Memorial Event, normally held outside Hopkinton High School, are planning for a virtual event again this June due to the ongoing pandemic.

While last year the event committee had to scramble to transition the event online, this year the decision was made much earlier.

“In talking with the committee, we decided that given with everything going on, and things are so much up in the air as far as when we can have large gatherings again and when something like a Timlin race can kick off and happen, we decided to start off going virtual,” event director Wayde Marshall said. “Based on conversations with some people in the town and the guidance from the state that’s coming out we just thought that made the most sense. And really just to have a safe environment for people to participate in, I think wait one more year and then look at where it is in 2022.”

Marshall did not completely rule out trying to hold something live in the unlikely event circumstances should dramatically improve, indicating it’s “a fluid situation,” but he said it would be challenging to organize an online and in-person event at the same time.

“I think at this point we have to make a decision which is the best path to go down, so we chose the virtual path. But who knows?” he said. “However, if you go down two paths it becomes a bit challenging to do twice the work.”

The event annually draws thousands of people for the 5K road race, color run and family fun day activities. It’s a fundraiser for the Angel Fund, which supports research toward a cure for amyotrophic lateral sclerosis, a neurodegenerative disease that’s more commonly known as ALS or Lou Gehrig’s disease. More than $2 million has been raised for the Angel Fund and ALS research since the race started in 2004, including $125,000 last year, Marshall said.

The event traditionally is held on the third Saturday in June. And while organizers prefer to see people run or walk their 5K on that day, this year participants will have a two-week span.

“We really want people to try to run it on June 19, because that day has become sort of special, the third Saturday in June,” Marshall said. “But we understand life gets in the way, so we’re giving them a two-week window leading up to the 19th.”

The entry fee is $30 per person, with a family/team of up to five discounted to $99. Registration was due to go live this week at sharontimlinrace.org.

Last year’s event drew 893 entrants, and with more advance notice organizers are hoping for a bigger turnout. They also are looking for local businesses and individuals to help with donations, sponsorships and silent auction items.

Participants are encouraged to upload their race time and share photos of their 5K. Last year’s event featured an online performance of the national anthem as part of the kickoff and a virtual toast from former Red Sox pitcher Mike Timlin. The race is named for Sharon Timlin, Mike’s mother, who succumbed to ALS in 2002.

“It is Father’s Day weekend that weekend, so we’re hoping a lot of families will run with dad and share some of the photos with us,” Marshall said. “Also, if you’ve got a story that you’d like to share with how you were affected by ALS, whether it’s you or a family member, we’d love to hear that too. We’ll share your stories in the lead-up to the race. During family fun day we have one piece of the field that’s called “The Faces of ALS” — people who have been really affected by this disease. We’ll be looking to take that virtual this year. So if you’ve got anyone that you know that’s been affected and would like to share your story with us and our community, we’d love to hear it.”

One advantage to having the race be virtual is that it allows for more widespread participation, especially for people who don’t live locally.