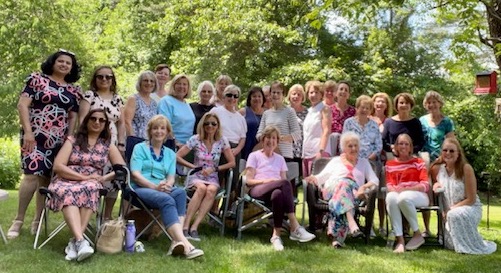 The Hopkinton Women’s Club (pictured at a recent event) is co-sponsoring a charity golf tournament on Sept. 26, among many upcoming activities.

When Doris Early moved to Hopkinton in 2018, she began looking for a local organization to join so she could connect with people in town. When she saw an ad for the Hopkinton Women’s Club, she decided to attend a meeting to see what the organization was all about. It didn’t take long for her to discover she had found just what she was looking for.

Four years later, she is serving as the Hopkinton Women’s Club’s president.

The Hopkinton Women’s Club was formed more than 100 years ago and is the oldest nonprofit organization in town. The group is widely known for its philanthropic work, raising funds for scholarships and other nonprofits in town.

“I love the fact that it’s all about giving back to the community; that was really important to me,” said Early, explaining what drew her to the organization. “Also, I’m a retired teacher, so I really like the scholarship aspect, and when I met the members, they were lovely and a lot of fun.”

These days, the Women’s Club members are busy organizing their latest fundraiser, a charity golf tournament being held on Sept. 26 at Shining Rock Golf Course in Northbridge. The Women’s Club is collaborating with the Hopkinton Emergency Fund for the event.

Although both organizations are rookies when it comes to organizing a golf tournament, Early said, so far, so good. “Things are going well; we’re all working together very well.”

For those who don’t golf, the September event will include lunch and an auction. “I’m not a golfer, so that’s what I’ll come for. It will be a nice way to spend an afternoon,” said Early.

The organizers are looking for auction items, sponsors, and participants. Individuals can contact either organization through their websites.

Proceeds will be split among the two groups.

In addition to scholarships, the Hopkinton Women’s Club also helps with funding for the Michael Lisnow Respite Center and the Senior Center, among others.

The Women’s Club also is planning to take part in the upcoming Hopkinton Poly Arts festival on Sept. 10 at the Town Common. The event features regional artists. crafters, performing artists and local nonprofits. The group will have its own table with hand-painted birdhouses. The group also plans to take part in the Holiday Stroll, slated for Dec. 3.

The Hopkinton Women’s Club is always open to new members. “People can join any time,” Early noted. The group typically meets the second Monday of each month at the Hopkinton Public Library. The next meeting is scheduled for Sept. 19. The guest speaker will be author Peter Zheutlin, who will discuss his latest book, “Spin.” On Oct. 17, Dr. Jayne Knott will speak about climate change.

Anyone interested in joining the Hopkinton Women’s Club or taking part in the charity golf tournament can get more information at hopkintonwomensclub.org.