Unified basketball back in Hopkinton 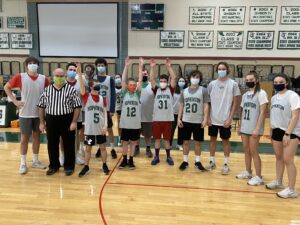 Members of the Hopkinton High School unified basketball team pose on the court before a recent scrimmage.

The COVID-19 pandemic has upended life for students of all ages, but the lack of routine and structure has been particularly hard on those students dealing with intellectual disabilities. But one significant piece of normalcy has returned this spring with the first unified basketball season since the fall of 2019.

“They’ve been troopers, just trying their best, but we have seen some of that craving for relationships and seeing their friends and being somewhere where they feel safe and supported,” said Caitlin Burke, one of the team’s coaches. “I was apprehensive about coming back to school, but the first week, I could feel it. I needed this.”

Added Burke: “I think everyone is feeling that way.”

Unified basketball pairs athletes who have intellectual disabilities with partners — other high school students who take part in practices and games to support their peers. Hopkinton has five athletes on this year’s basketball team, including Liam Finnegan, who is in the 18-22-year-old group and is in his third year on the team.

Burke and fellow coach Jay Golden describe Finnegan as the captain of the team.

“He is the mayor of Hopkinton,” Golden said. “He knows everybody, he is friends with everybody.”

In addition to being a popular member of the program, Finnegan also is a “go-to” shooter, his coaches said. 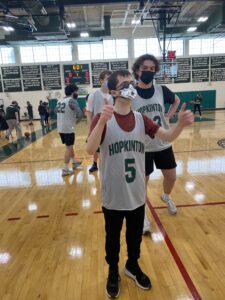 Jack Malone warms up before a scrimmage.

Jack Malone, a freshman, is back for his second year with the team. Burke, his teacher, said his love for basketball is palpable. She even set up a play hoop in the classroom so he can get in a little extra practice.

“He is getting so much better with his dribbling and shooting,” she said. “He loves the attention and the relationship with the guys on the team.”

Hopkinton also has a trio of eighth-grade athletes: Ciaran Halliday, Jacob Murasko and Jack Ruran. Halliday is in his first season playing basketball and has become an instant hit with his teammates.

“The kids just go nuts when he does a skill because he will look over and say, ‘Did I do it right?’ And I’ll say, ‘Yeah, man! You’re doing it!’ ” Burke said.

Halliday and his mother make handmade shirts with a logo he created on them and are working on making some for the entire team, Burke said.

Murasko is a dedicated sports enthusiast who serves as the manager for the Hillers’ eighth-grade basketball team and is involved with the Boston College swim team.

“He is our MVP this year,” Burke said. “He is super talented. He will call our plays as the point guard and just be Mr. Basketball out there.”

Ruran participates virtually trough Zoom. Burke opens up her iPad and there is a staff member who works with him at home where he has a court and a hoop. Ruran stretches out with the team, and then the frequently sanitized iPad is passed around among the other athletes and partners throughout practices and games.

“Any time you pop on to Zoom, he has this huge smile, he is super happy to be there,” Burke said. “His teammates really engage and they are super pumped when they get him to laugh or smile, especially when he makes a basket at home.”

Bringing the team back together has provided a lift for students who missed out on valuable time with their friends and classmates.

“It’s been a very difficult thing to watch, not having answers for them,” Burke said. “A lot of our students kept asking, ‘When do we come back to school, and when do I get to see my friends?’ ”

But now they are getting some sense of normal back into their lives. In addition to playing basketball, the team has organized other activities, including the Polar Plunge — which more closely resembles an ice bucket challenge — spearheaded by one of the partners, Bianca Pal.

The fundraiser has provided more than $4,800 for Special Olympics, the coaches said.

“For everybody, for students, for staff, it’s been an adjustment day-to-day for the past year,” Golden said. “But any moment we are able to spend together in the classroom or on the basketball court, there is a sense of gratitude. That’s what it’s all about.”