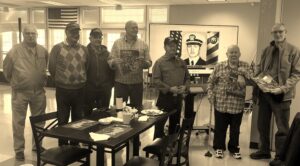 On Friday, another successful Veterans Breakfast was hosted at the Hopkinton Senior Center. With support from MetroWest Veterans Services, Dunkin’ and the Hopkinton Garden Club, about four dozen veterans and friends gathered for good chow and camaraderie.

The photo above shows a sampling of veterans who participated in the breakfast discussion. Messrs. Boelsen, Lynch and Graham are holding copies of Yank magazine from 1945. The firsthand commentary of the 1940s contributed to a sharper understanding of what veterans experienced.

Plans are underway for the next Veterans Breakfast on April 1, the first Friday of the month. It is the anniversary of the beach assault on Okinawa, the last big battle of World War II. Two dozen Hopkintonians participated in that battle.