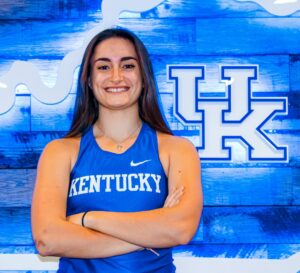 Kate Powers recently committed to continue her track and field career at the University of Kentucky.

Kate Powers has emerged as one of the top track and field athletes in Massachusetts and has anchored multiple state championships during her time at Hopkinton. The HHS senior will continue her track career with one of the nation’s strongest Division 1 programs after signing to compete with Kentucky next season.

“It was the best combination of athletics and academics for me,” Powers said. “It’s a great track program, top five in the country, and I felt like I fit in with the school and the whole team. It felt like home there.”

A thrower in track and field, Powers said she plans to become a physician’s assistant, and UK gives her the opportunity to pursue a degree in health sciences while setting her up to go to graduate school. She said she is not exactly sure what role she will play with the Wildcats next year, but she is looking forward to having a new experience.

“It’s a little different from Hopkinton, but I thought Lexington was a great city,” she said. “I am excited to get out of my comfort zone.”

Powers’ transition to the collegiate level comes as she wraps up a stellar high school career. She was part of state championship teams in indoor track in 2020 and volleyball last fall. Powers has also posted numerous individual accolades, including winning multiple Tri-Valley League championships in the shot put and discus.

“I want to enjoy my last track and field season and be a good leader for my teammates,” she said. “I want to be there for them and focus not just on my own performances but on everyone else’s performances.”

Powers has been a good teammate throughout her career, according to Hillers track and field coach Jean Cann.

“She can be heard all around the track cheering for her teammates,” Cann said. “Fortunately for us, we still have a whole outdoor season with Kate, and then we’re excited to see her continue to excel at Kentucky.”

Cann touted Powers for her versatility. She qualified for the finals of the 55-meter dash at the TVL showcase, and her time was good enough to earn a spot in the Division 2 state championship meet. Perhaps her most impressive accomplishment was going undefeated during the pandemic-shortened season last year while throwing with her non-dominant arm after surgery.

“Kate has been an instrumental part of the team since she first joined us in spring of freshman year,” Cann said. “She pairs her talent with an admirable work ethic and competitive drive.”

Powers is finishing her final indoor season on a high note. She won a league and divisional state title in the shot put and set a new program record in the weight throw. Powers was scheduled to compete in both the Nike and New Balance national meets in March. After that, it will be time for the spring track season and then a summer of training to prepare to compete at the highest level of collegiate track and field.

“I feel like I have had a great year and I am happy with what I have been able to accomplish,” Power said before quickly adding: “But I am not satisfied.”