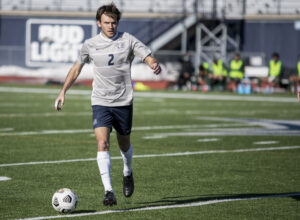 Jonny Wolf’s 2020-21 season came to an early end due to an injury, but he plans to play in the fall as a graduate student and take another shot at making the NCAA tournament. PHOTO/CHINA WONG/UNH ATHLETICS

Jonny Wolf’s soccer career at the University of New Hampshire has included numerous peaks and valleys, and the Hopkinton native is hoping for a strong finish after he recovers from an injury that has him sidelined.

Wolf, a marketing major, stepped awkwardly during the fourth game of the pandemic-displaced season. He watched from home as the Wildcats ran through their schedule unbeaten and earned a spot in the NCAA tournament.

“It’s definitely been one of the more challenging times in my life,” Wolf said. “I would be playing, I am a captain this year and watching my team from the sidelines has been one of the hardest things.”

But the Worcester Academy graduate has enjoyed some great moments with UNH as well. He was part of a Wildcats team that won the America East Conference during his sophomore campaign and he had the chance to play in the NCAA tournament then.

A midfielder and back, Wolf earned a spot on the conference’s all-tournament team in 2019 and was named to the all-rookie team as a freshman in 2018. He started all 20 games last season.

Wolf spent several weeks waiting for the swelling in his leg to go down before surgery. His plans now involve spending a lot of time in the training room — being the first one in and the last one out so he can get back strong and healthy for the 2021 fall season.

“I am looking at six to eight months, hopefully I can recover fast,” Wolf said. “I am going to be working extremely hard, just focused on rehabbing every day and hoping to speed the process up a little bit.”

Wolf said he wants to be playing in the postseason next fall. He took a redshirt season upon entering college, so he will graduate this spring. Because of the injury, Wolf could play in 2022, but he said he is not making any definitive plans beyond his fifth year. He already has been accepted into graduate school at UNH, a place he said has been a great fit from the start.

“I think it’s a combination of the area of Durham, New Hampshire, and how beautiful the campus is,” Wolf said. “On my visit, the relationship I was able to create with the coaches was something I really enjoyed.”

Added Wolf: “I wanted to play a high level of soccer. All of those reasons drove me there, and I couldn’t be happier.”

Wolf wants to continue to play soccer at a high level after college. Before his injury, he had planned to play with one of the New England Revolution developmental teams.

“I can hopefully come back from this injury and be better than I was before and maybe get signed somewhere,” Wolf said. “The goal would be to continue to play after college.”

Helping him along is a strong support system that includes people from his high school and his hometown.

“I always knew it was there, but now during the injury I am seeing that even more people from my high school and Hopkinton are reaching out to me, friends that I haven’t talked to recently wishing me the best and wishing a speedy recovery for me,” Wolf said.

“The support I have had has been amazing,” he said. “I am fulfilling my goals in life and everyone is happy to see me doing well.”