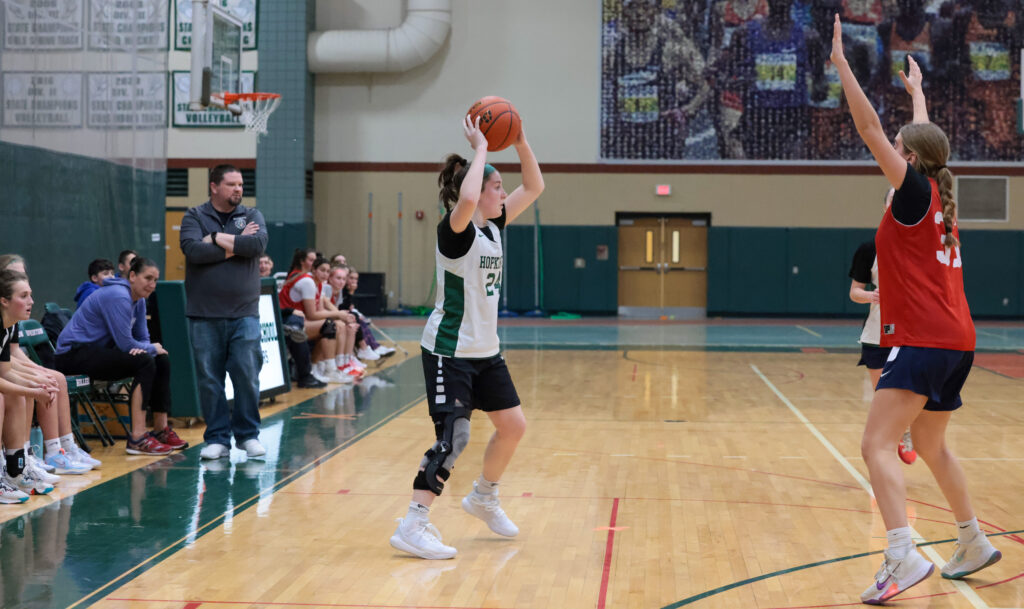 Junior captain Caroline Kane, shown during a preseason scrimmage vs. Natick on Dec. 5, returns after missing all of last season with a torn ACL. PHOTO/JOHN CARDILLO

Hopkinton High School girls basketball fans will notice quite a few new faces on the floor this season. The team graduated six seniors who played the lion’s share of the minutes last winter. What this year’s team lacks in experience, so far it has made up in effort.

“We have a really nice group of kids and they are playing really hard,” coach Mike Greco said. “They are young, so I think the game is a little fast for us right now, but that will change as we get more experience. But they are a fun group to work with.”

The roster represents a turnover not only from last season, but from the last several seasons as some of the seniors who graduated in 2022 had been three- or four-year starters.

“We are trying to forge our own identity,” Greco said of this year’s team. “We need to figure out who we are as a group and adjust to the varsity pace and physicality. It’s still a challenge in the moment, but our goal is to try to get a little better every day.”

Hopkinton comes in off a season in which it advanced to the round of 32 in the state tournament. After knocking off Malden in the play-in game, the Hillers’ 2021-22 campaign came to an end with a buzzer-beating loss to Chelmsford.

Leading the way this year are junior captains Elena Davies and Caroline Kane. Davies played spot minutes for the Hillers last year and now is taking over the point guard role this winter. Kane is looking to bounce back after missing all of last season due to an ACL injury.

“She provides a lot of leadership and toughness for us,” Greco said.

“She has been with the program for four years, and we are looking to her for leadership and toughness underneath,” Greco said. “She does a good job blocking out.”

“They sacrifice their body,” Greco said. “They lead the team in floor burns.”

Holly Paharik and Charlotte Holden are back with the program as sophomores. Paharik is a tough interior player whose leadership ability belies her age, Greco said, and Holden is a skilled ball handler. The Hillers also expect to receive contributions from sophomore Meghan Grady and freshmen Ashley McCann and Teagan Resteghini.

With a relatively undersized lineup, Greco said the Hillers are going to lean on their defense throughout the season.

“We are going to be a team that pressures, traps, tries to turn teams over and then gets out and runs the floor,” he said.

The biggest obstacle will be the growing pains that come with a lack of experience.

“I wish there was a shortcut, but a lot of that stuff you have to go through and experience, so our biggest goal is getting the game to slow down mentally,” Greco said. “I think there are times where our minds are going 1,000 miles per hour out there and the bodies can’t keep up, but it’s getting better as the games go on.”