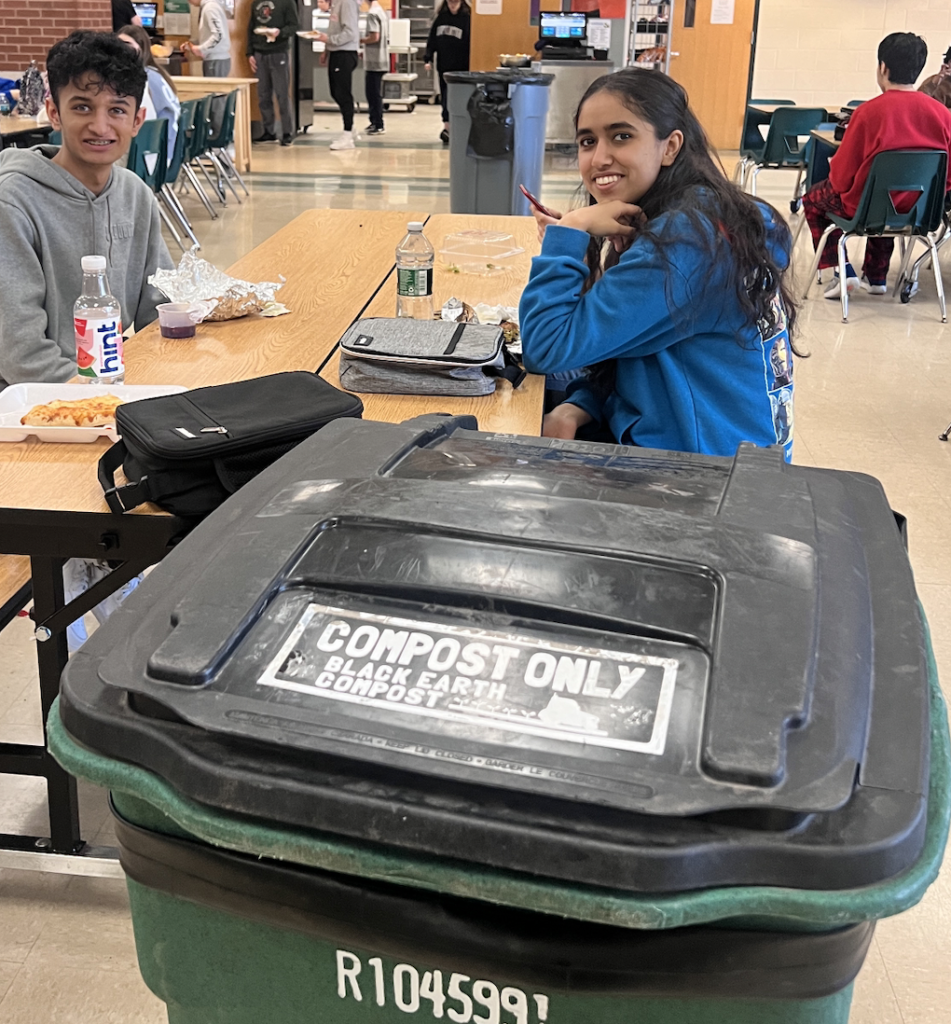 Food scraps are being collected in the Hopkinton High School cafeteria as part of a program to improve sustainability measures. PHOTO/ALICE POTAPOV

This fall, a trio of students at Hopkinton High School launched a composting program to address the problem of food waste in the school cafeteria. Now others are hoping it could be the impetus toward more town-wide awareness.

Interest in the idea by Alice Potapov, Avani Daga and Alveena Ehsan dated back to their freshman year as members of Passion Project, a club based on the sustainable development goals of the United Nations.

Potapov said instituting sustainability measures in school appeared to be the most “realistic” and “doable” way to get involved helping the community.

“With the climate crisis being passed down to our generation to solve, now more than ever it’s crucial to instill sustainability habits into our communities,” Potapov said.

Daga explained that the trio sought guidance from Assistant Principal Laura Theis and Building and Grounds Director Timothy Persson and began to work with Black Earth Compost, a local company.

Black Earth collects food scraps and transports them to its facility. There the material is mixed, turned and screened while it decomposes, producing a nutrient-rich soil additive.

In July, the students took their proposal to the School Committee, which approved annual funding totaling $5,000 for the program. The district signed a contract with the company and now has pickups once per week, on Wednesdays.

The trio created informational materials about the kinds of waste that can be discarded in composting bins and those that cannot, and they got the word out to peers through posters, social media and the weekly school memo.

Volunteers from the National Honor Society monitor the bins through the four lunch shifts that run for about 1 1/2 hours.

Initially, the bins were used only once per week, but that practice has expanded to include all weekdays.

Although the students do not have data from Black Earth Compost about the amounts collected so far, Potapov acknowledges, “It’s difficult to get hundreds to create a habit.” The effort is growing “slowly and surely,” she said, as students reach out to their friends and families and spread information.

The students hope to expand the program to include kitchen staff as well, noting waste is produced as food is prepared. They also would like to see the effort extend to the elementary school level, noting if new habits are ingrained at an earlier age, it will be easier to get kids at the middle and high schools on board.

As a member of the town’s Sustainable Green Committee (SGC), Potapov and other board members are in the beginning stages of working to understand the feasibility of Hopkinton offering a town-wide collection, similar to trash and recycling pickup.

The students are doing their part to lead the way.

“As of right now, our priority is informing all households of our efforts and making sure that parents and children alike know what happens to their waste once it leaves their home,” Ehsan said.

“I was reluctant to do so initially as I felt it is a big hassle,” Yang shared. “My child lectured me and trained me to put the right stuff into the right bins.”

She added that her interest in sustainability was sparked and led her to joining the SGC in June and work on outreach activities along with other members.

“Our young people are leading us to act more responsibly,” Yang stated.

According to SGC member Christine Coffman, choices in Hopkinton include home composting or going through a private service (Black Earth) that conducts a town-wide pickup on Wednesdays.

Coffman said she personally uses this service, and it has reduced trash by as much as 50 percent.

Daga noted about 200 households in town currently use Black Earth’s services, and she hopes other homes decide to build on their efforts.

Coffman added the HHS composting program is “fantastic,” pointing out that food waste represents a huge portion of what goes into the town’s waste stream. “It doesn’t have to be,” she said. “We need to start somewhere as a town, and I’m delighted that this is a student-led, administration-supported initiative.”

Added Coffman, “The schools represent a significant opportunity to change behavior and teach all ages how to be better stewards of the earth.”

According to the Sustainable Green Committee, the pickup fee gets reduced as more residents adopt the services. SGC members point out that Cambridge uses compost pickup as part of its sanitation services while towns like Westborough provide communal bins where residents can take their food scraps.

More information for community members can be found at HopGreen.org. The site includes links to sign up for Black Earth Compost service as well as information on do-it-yourself composting.