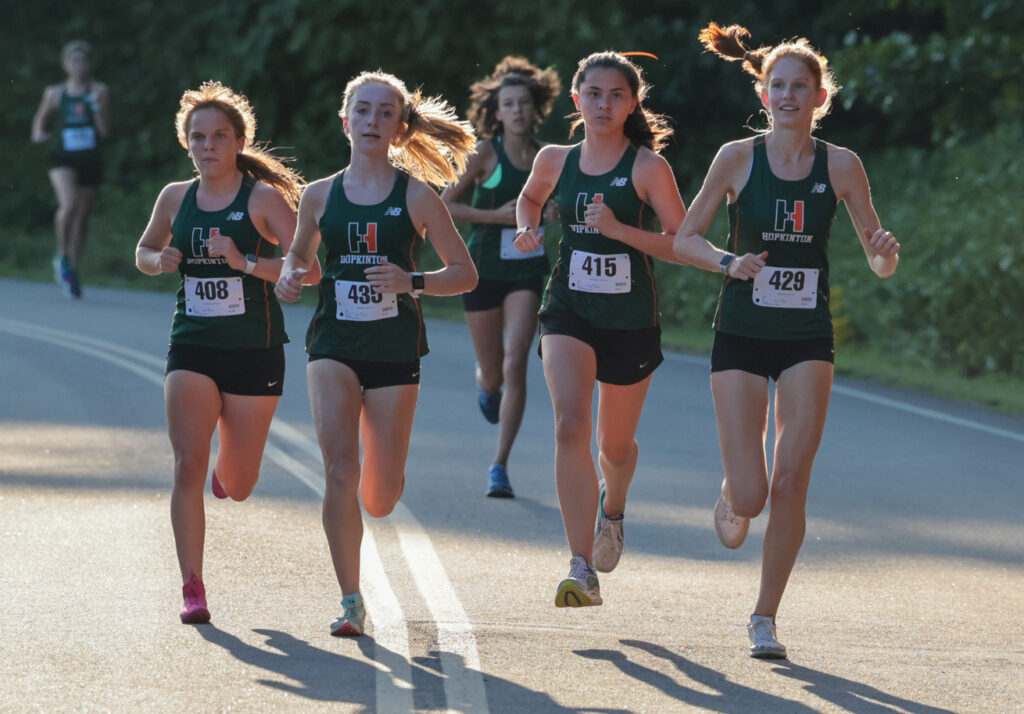 Hopkinton High School girls cross country coach Jean Cann thinks her team probably caught Holliston by surprise when the two tangled in a Tri-Valley League meet this fall. The Hillers graduated two seniors from their top five a season ago and have just one senior in the top seven.

But Hopkinton came within six points of the perennial league power and likely Tri-Valley League champion despite senior captain Autumn Tumbleton being under the weather.

“Holliston came in thinking they were going to beat us easily, they completely underestimated us,” Cann said. “I know they will be looking over their shoulders at the TVL meet.”

Hopkinton has been driven by a strong group of young runners, many of whom have risen to the top of the pack this fall. Elyse Srodawa checked in as the top Hiller in back-to-back meets, and she is just a sophomore.

“She worked really hard this summer and put in some good miles,” Cann said. “I expected that she was going to challenge for the top spot. She had a really good outdoor track season too, she made all-states in the two mile.”

Another sophomore, Avery Sawyer, has been among the team’s top runners and has been able to step in as an illness made its way through the roster during the early part of the season.

“It’s been nice that some other girls could step up when we needed them to,” Cann said. “We have very good depth.”

Kyra Torgerson and Shelby Jones are captains this season, along with Tumbleton, and Cann praised the trio of seniors for the way they have anchored the rest of the team.

“They did a great job getting people together over the summer and running together,” she said. “And they have helped a ton with the leadership during the fall.”

Twin sisters Bethel and Abigail Flanagan are two more consistent point scorers. A basketball player during the winter, Bethel cracked the top five this fall in her first season with the cross country program. Abigail has improved significantly, her coach said, and consistently has been the number six runner in the HHS lineup.

Another runner who has made significant strides is Bridgid Cavanaugh, who was just outside the top 10 for the team a season ago but has moved into the top five this year. Sophomore Malia Grant has gotten stronger and been in the top seven, and junior Sophie Weeden has been a consistent top-10 runner who earned a spot in the top seven during the third meet of the year.

Ashley Callery is another multiport athlete who was a TVL All-Star in softball last spring and has been a strong runner for Hopkinton this fall. Meaghan Burdulis is the only freshman in the team’s top 10 and comes from a family of talented runners.

“I give her a lot of credit,” Cann said. “Being the only freshman in the top 10 can be intimidating, but she has held her own and we expect to see even more from her going forward.”

After the strong dual meet performance against Holliston, Cann is looking to the TVL showcase meet as a barometer for where the team can finish during the postseason.

“I would love to see what we can do against Holliston at the TVL meet,” she said. “I think that will be a good sign for the rest of the year. We want to place as high as we can in the divisional meet and get back to all-states.”