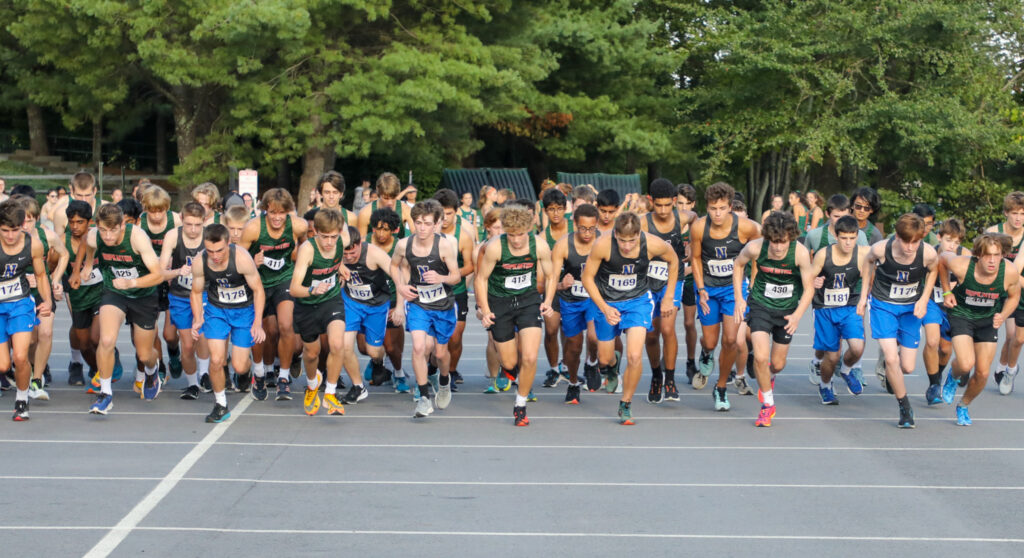 The HHS boys cross country team heads out into Hopkinton State Park during a recent meet against Norwood. PHOTO/JOHN CARDILLO

Hopkinton High School’s boys cross country team is in the midst of a strong season, and coach Laura McKenzie says it’s because her captains know that success in this sport starts well before the first starting gun sounds.

The trio of Crag Salois, Lex Kaye and Wyatt Ruff “set the tone” for the rest of the squad, McKenzie said.

“They are all seniors and I have been with those guys since they were in middle school,” she said. “They have been working since middle school to this senior year and they have been great competitors this whole time. It’s bittersweet for me that this will be their last year with the program.”

The seniors want this year to end with an appearance in the all-state meet after just barely missing out on that final competition a season ago. The Hillers also set goals of wanting to capture a Tri-Valley League crown and earn a win in the TVL showcase meet.

Salois has been the top runner for Hopkinton throughout the first half the season, but the pack of runners behind him has been somewhat interchangeable, McKenzie said, and a testament to the team’s depth.

Junior Ben Scott, sophomore Stephen Leighton, Kaye and Connor Dorfman all raced in the top five among the team through the first three meets of the season. Sophomore Cam Arnold is another runner who improved over the summer to earn a top-seven varsity spot. Senior Charlie Miller also has been in the top seven, even though it is just his first year with the program.

Hopkinton managed three early victories despite not having Ruff, who was battling an injury but was expected to be available for the second half the year as well as the postseason meets.

“We have been doing really well without one of our strongest runners,” McKenzie said.

In addition to the dual meet wins, Hopkinton placed fifth at the Ocean State Invitational, a strong finish in a prestigious event. The Hillers are aiming for a top-seven finish in the state divisional meet, which would be good enough to guarantee a spot in the all-state competition.

“That is what they are looking to do and they are good enough to do it,” McKenzie said. “But it’s hard, there is a lot of competition and a lot of talented teams.”

But, if the Hillers do fall short, it will not be for a lack of effort.

“They have put the work in,” McKenzie said. “They came in ready to go, and that is the culture our captains have set, so I think our goals are achievable. I know they can do it.”

And even though each runner will compete on his own, competing with the best in the state will be a collective effort.

“It’s an individual sport,” McKenzie said. “But you can only really achieve this goal by being a team.”