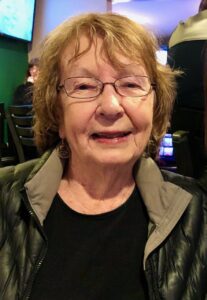 She was born on Christmas Day in 1930, as the daughter of the late John and Lucy (Pomeroy) Terry. After graduating from Hopkinton High School, she furthered her education by earning an undergraduate degree in foods and nutrition from Regis College in Weston, and a master’s in education from Framingham State College.

Irene dedicated her entire professional life to empowering patients and clients as a dietician and nutrition specialist. Nutrition was her passion. She spent the majority of her career at Saint Vincent Hospital in Worcester and Clinton Hospital, along with founding a private practice, Nutrition Consult, which she operated out of her Hopkinton home. She remained steadfast in her commitment to encourage health and well-being through coaching techniques, integrating resources, and counseling skills. Irene previously chaired Living Bread, a world hunger action group supporting development projects in Haiti. Her incredible work ethic never wavered, as she fully retired in her late 80s.

Irene held strong values throughout her life, which included remaining active, positive, loyal and fiercely independent. She enjoyed several biking trips and took great pride in tending to her property. She was a fabulous cook and would gladly host countless holidays and family get-togethers over the years. An animal lover, she cherished all of the canine and horse companions who graced her life. Above all, she took great delight in her family, always supporting them in their endeavors.

She leaves behind her children, Kathleen Arena and partner James Basnett of Littleton, Beth Timlege of Monterey and partner Michael McBride, and Kimberly Timlege of Brattleboro, Vermont, as well as four grandchildren, John Arena III and wife Haili of Concord, Emily Arena of Littleton, and Connor Timlege and Caitlyn Timlege, both of Webster. She was the mother of the late Brian Timlege, who died in January 2022, and sister to the late John “Bud” Terry and Mary “Mimi” Terry.

Irene will be laid to rest during a private burial service at St. John’s Cemetery in Hopkinton.

Arrangements are under the care of her grandson, funeral director John Arena III of Dee Funeral Home & Cremation Service of Concord.