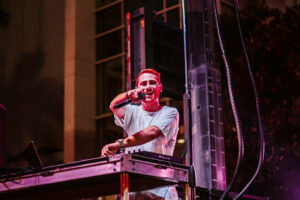 Hopkinton’s Stephen Auslander, now a rising junior at the University of Miami, has been DJ’ing since his sophomore year at Hopkinton High School.

With one song newly released and another on the way, DJ Stephen Auslander, who goes by the moniker “SAUS,” has a bright future in music, a future that began right in his own hometown of Hopkinton.

“There is something about music that I have always been drawn to,” said Auslander. “[Hopkinton Public Schools Music Department leader Craig Hay] was my teacher from the time I was in fifth grade until I graduated, and I always looked forward to going to his class. I loved that feeling you get when you are performing music.”

The 2017 Hopkinton High School graduate played trombone for years in the concert band and jazz ensemble and helped start HHS’s basketball pep band. While performing music was always a passion for Auslander, he also loved to listen to music and learned to put his own spin on it to create a new sound.

“I got my first gig when I was a sophomore in high school,” he said about starting his DJ’ing venture. That one friend-of-a-friend’s birthday party turned into DJ’ing different events such as parties, graduations and bar mitzvahs throughout high school and into college.

When Auslander got to the University of Miami, where he is entering his junior year in the Frost School of Music studying music production and music business, he kept his DJ’ing going and now scratches tunes at an on-campus bar on Friday nights and at local dance clubs in Miami.

“Being a DJ in clubs is still a way for me to perform, but it is a lot different then watching me play trombone with the rest of my band,” he said with a laugh.

The young artist, the son of David and Lynne Auslander, on July 19 released his first single, “No One Else,” a song for which he wrote the instrumental music and collaborated on the lyrics with University of Miami classmate Haley Fishberger. The single can be heard on his Twitter page (twitter.com/sausofficial) as well as all major music streaming platforms such as SoundCloud.

His second single, “You,” which is due out Aug. 28, was inspired by Auslander’s trip to Amsterdam to study with industry professionals during a producer coaching program.

“It was so cool to be able to be there where some of my favorite artists have recorded before,” he said about recording the track at the prestigious Stmpd Rcrds studios in Amsterdam.

“You” follows the musical styling of “No One Else” as electronic dance music, but is a beat that is closer to his heart.

“I am really excited to release this one. I have never been prouder of a song,” he said.