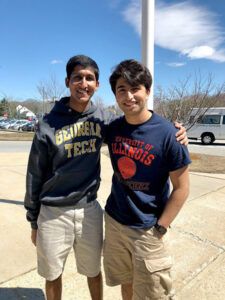 Because this is sometimes easier said than done, the two young men have developed a new, unique meditation app to help you relieve stress, fall asleep fast and focus on the art of mindfulness.

Himanshu Minocha and Avi Arora are the two developers of Bluezen, a meditation app that is aimed at “making meditation more beginner friendly using unique technology.” That technology is called 8D audio. The idea behind 8D audio is to make a meditation sound as if it is originating from a point in space. As the user meditates, this point moves around them, giving them a specific and clear object upon which to to focus. The app also includes custom guided meditations, sleep radio and a seven-breath feature, with intuitive graphics to aid the user with controlling their breathing, “for people looking to quickly find their center and relax.”

“This is an app that will help everyone — from beginners to those used to meditating,” said Minocha. “It gives you something to focus on that is not just your own thoughts.”

Minocha and Arora, who are rising sophomores at the University of Illinois and Georgia Tech, respectively, wanted to develop an app that provided easy and accessible ways to solve a problem that is plaguing society today.

“We knew that a lot of people are struggling with mental health issues, and we wanted to find a way to help people dealing with anxiety through mindfulness and relaxation,” said Arora. “We saw the benefits that being more in control of what you think has on anxiety.”

The user-friendly app includes guided meditations, which are newly added every week, spanning topics such as sleep, focus, financial abundance and music of nature. Although the app is free to download, to enable all of the features there is a $4.99 monthly fee.

“There are a lot of niche apps out there that you have to pay for — ones that are for meditation, ones to help you sleep, etc.,” said Minocha. “Bluezen has the capacity to do all of these things for one low price.”

The app already has received high marks from more than 4,000 users, with a 4.8 out of 5 on the app store since it was first launched in late July.

Before its launch in late July, the two men had been working on developing Bluezen since December 2018. And although it is the first app that they have created together, this is not the first app that the young men have developed alone. Both Minocha and Arora have published a number of apps in the past, one of which — a web browser app created by Minocha — has more than 200,000 downloads.

But it is with Bluezen that the two have realized that they can provide a meaningful way for people to focus on mindfulness in a way that is different from other meditation apps.

“We have made meditation more accessible and less scary for people,” said Arora.