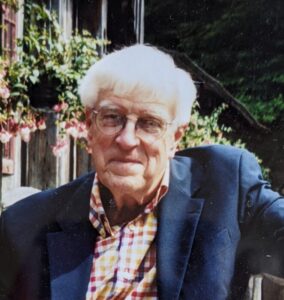 Arthur B. Matson Jr., 94, formerly of Hopkinton, passed away peacefully on May 14 at home surrounded by his loving family. He was the husband of Nancy C. Matson, with whom he shared 63 years of marriage.

Born in Worcester, he was the son of the late Arthur and Lillian (Skarin) Matson. He was educated in Worcester and was a graduate of North High School. He also attended and graduated from the Massachusetts College of Art in Boston.

During the Korean Conflict, he served with the United States Army, earning the Army of Occupation Medal and attaining the rank of corporal.

Arthur was employed as a commercial artist with Fannell Studios in Boston and then freelanced for 10 years prior to his retirement.

In addition to his wife, he is survived by two sons, Robert A. Matson and wife Ronda of Millis, and Rev. David J. Matson and wife Jessica of Readfield, Maine; one daughter, Jennifer A. Andrews and husband Scott of Centerville; seven grandchildren, Erin, Amanda, Robert, John, Rachel, Leif and Dylan; and four great-grandchildren, Michael, Abigail, Vivienne and Mila.

He leaves his nieces, Wendy Sawyer, Holly Perry and Andrea Honore, as well as his nephews, E. Guy Sawyer and Chuck Swanson.

Arthur was predeceased by a sister, Shirley Sawyer.

A funeral service will be held on Friday, June 3, at 10 a.m. at Good Shepherd Lutheran Church, 183 West Main Street, Westborough, followed by a reception. Burial in All Faith’s Cemetery, Worcester, will be private. Services are under the care of the Pickering & Son Westborough Funeral Home.

In lieu of flowers, donations in his memory may be made to Good Shepherd Lutheran Church Memorial Fund, 183 West Main Street, Westborough, MA 01581.