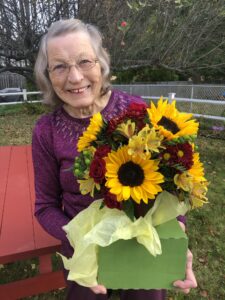 Barbara Kimball, 94, of Hopkinton died comfortably at home in hospice, in the care of her family, just as she wanted. Born in Wellesley to the late Leroy and Anna Siebert, Barbara was determined to live her life her way. She took up flying when her father told her she couldn’t get a motorcycle license. Working at Hilliard’s Candy Store helped her afford lessons that later led her to join the Civil Air Patrol.

In her life, she was a Sunday school teacher at Grace Church in Framingham, a Cub Scout den mother, Hopkinton secretary for the selectmen, worker at the Welfare Office, and more notably assistant branch manager at the Hopkinton/Holliston Bank for Savings, now Middlesex Savings Bank.

Barbara was an avid outdoors woman and loved going to the various Audubon sanctuaries and trips hosted by Audubon, her favorite being Stony Brook Wildlife Sanctuary in Norfolk, where she led birding walks. Her other favorite place in the world was Baxter State Park, where she was always on the lookout for a moose. Many family trips out hiking, snowshoeing, canoeing and camping with her late husband Everett, children and/or grandchildren over the years gave her great joy. She would often be spotted for her evening walks around town with her son Wayne. On trips down to Arkansas, where she would visit her son Ken and his family, she enjoyed adventures with the grandkids and great-grandkids, including mudding on four-wheelers. Another group she enjoyed was the Walk’n Mass Volkssport Club.

This tenacious and wonderful woman was predeceased by her husband Everett, their daughter Deborah Anne, their son Kenneth, and grandson Kenneth Jr. She leaves behind her two sons, Wayne and his partner Sharon, and Clifford and his wife Barbara, three grandchildren Tracy, Christine, Carrieann, and Kat, 8 great grandchildren, and 7 great great grandchildren with one more on the way. In lieu of flowers, memorial donations may be made to Stony Brook Wildlife Sanctuary, massaudubon.org or Walk ’n Mass Volkssport Club.

Funeral arrangements are being held privately with family and are under the care of the Chesmore Funeral Home of Hopkinton.