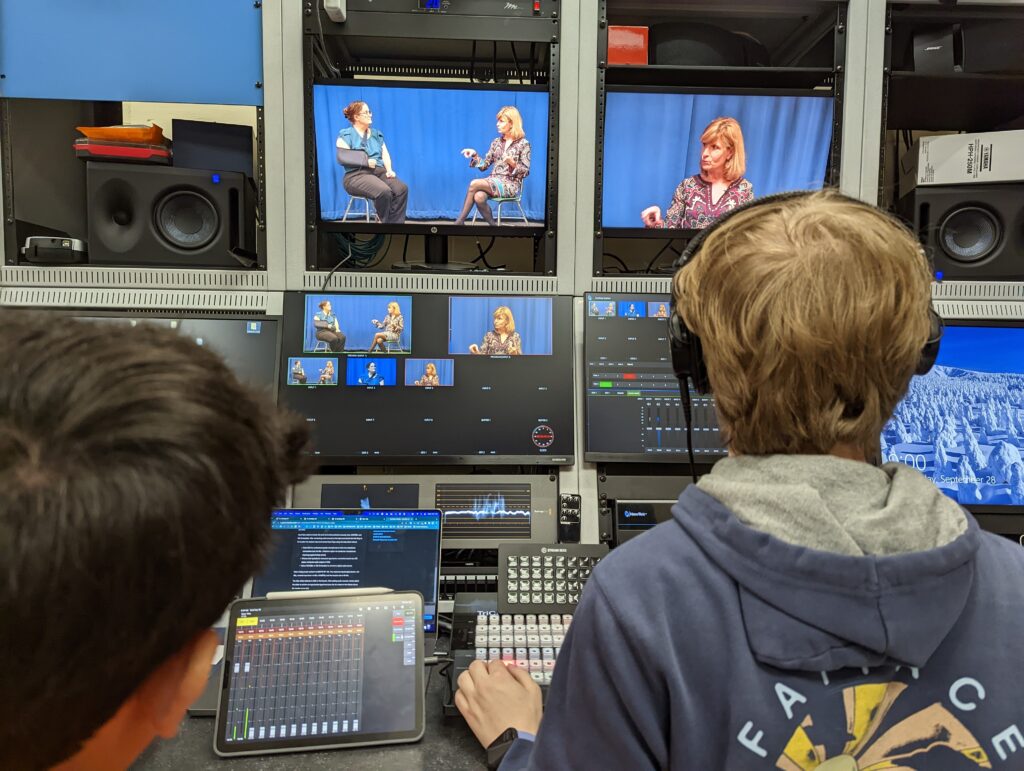 Students work on the “Highlights from the Hill” show at Hopkinton High School’s TV studio.

Hopkinton’s local cable access station, Hopkinton Community Access & Media (HCAM), has debuted a new live program called “Hopkinton Weekly,” airing most Wednesday evenings from 7-7:30 p.m. “It is designed to foster connection and communication among our community,” says station manager Jim Cozzens. “We have interviews and information on what is happening in our town. It’s also the anchor for what we’re calling Must-See HCAM-TV, since Wednesday nights are when we have a lot of our first-run original programming.”

While much of HCAM’s work revolves around covering events and developments in town, Cozzens says ‘Hopkinton Weekly’ is “original programming about the people and groups that make Hopkinton a great place. Its goal is not covering something but interacting and highlighting our community as we make the show.”

Cozzens says the new show utilizes many of the lessons the station learned while adapting its operations amid COVID-19. During the pandemic, HCAM began producing a live show called “The Hangout Hour” in which staff members connected remotely from their homes to keep community conversations going. “What we learned from that were new ways of creating programming,” Cozzens says. “For example, in addition to being live in the studio, we also bring guests on through Zoom, so we can increase the potential for guests to interact.”

Unlike most TV stations, HCAM operates as a nonprofit. “It matters that we’re a nonprofit because we can focus on our mission, which is simply to connect our community with all kinds of information,” Cozzens explains. “So we don’t have to pick information based on whether it’s going to support a corporation but only because it’s good for our community.”

In addition to its broadcast work, HCAM also provides hands-on industry training to the community. Registration is open for a new series of TV production workshops in which participants will learn the ins and outs of making a TV show.

HCAM also works with Hopkinton High School, where Cozzens teaches a class in TV production. This year, the high school studio received several upgrades including robotic cameras in the auditorium, and thanks to a grant from the Hopkinton Education Foundation, HCAM has rebuilt the student control room. “Highlights from the Hill,” a show produced with Superintendent Carol Cavanaugh, also recently moved from the HCAM studios to the high school.

Becoming a TV station manager and high school educator was an unexpected path for Cozzens, who says he originally hoped to be “the next Steven Spielberg.” After graduating from Boston University with a degree in broadcasting and film, his first job was at Westborough’s community TV station. “Within six months, I realized that instead of wanting to make movies that millions of people could enjoy for two hours,” Cozzens says, “I would prefer to work at a small-town TV station that the residents could benefit from every day of the week. I realized that my passion is community information. I just love connecting the community with information.”

HCAM-TV airs on Comcast Channel 8 and Verizon Channel 30 and livestreams at hcam.tv/live.