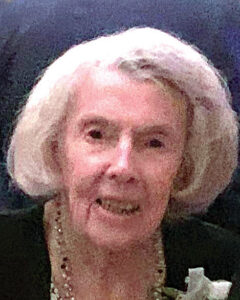 Clytie Arlene (Banks) Foster, 93, of Hopkinton died peacefully at her home on March 1. She was surrounded by her children. Born in Rossway, Nova Scotia, Canada, Clytie was one of 10 children born to Loren and Edna (Peters) Banks. She is predeceased by her husband of over 60 years, Robert, who passed in 2012. Clytie spent her life between three countries: Canada, the United Kingdom and the United States, but Canada was her true home.

Clytie was a poet, an artist, and published short story author. She was a devout Baptist Christian. Her family was her biggest joy, but her friends, of whom there were many, were a close second. Clytie was truly a kind, loving, forgiving, strong, remarkable woman. Anyone in Clytie’s life was blessed to have her.

Clytie is survived by her five children, Robert Foster and wife Cindy of Holliston, Clare Lynch of St. Petersburg, Florida, David Foster and wife Laura of Plymouth, Alice Resker and husband Robert of North Grafton, and Victoria Hart and husband James of Hopkinton. She was the loving grandmother of 13 and great-grandmother of two. She has one remaining sister, Irene Sabean of Seffner, Florida, and numerous nieces and nephews.

Visitation will take place Thursday, March 12th, from 4-7 p.m. at the Chesmore Funeral Home of Holliston (ChesmoreFuneralHome.com). A memorial service will be held at the Woodville Baptist Church in Hopkinton on Saturday, March 14, at 11 a.m. Burial will be held in August at the Rossway Baptist Church on Digby Neck, Nova Scotia, alongside her beloved husband.