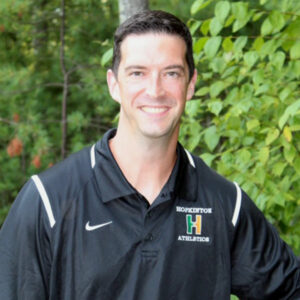 “Rich really impressed the interview committee throughout the process,” HHS principal Evan Bishop said. “He came highly regarded form his time in Foxboro. He comes across as someone who fits our core values and beliefs, really values the importance of relationships with student-athletes and coaches. We just feel he’s going to be a great role model for our students and our coaches and fit right in to our culture.”

Cormier, 37, served as AD at Foxboro for three years. Prior to that, he was a teacher, dean of students and boys basketball coach at Norwood High School.

It was also at Norwood High where he met his wife, a fellow history teacher at the school. Last year Colleen Cormier took a position teaching at Hopkinton High School.

The Cormiers, parents of twins entering the first grade, last year moved to Mendon. So when the HHS AD job became available, Rich saw an opportunity too good to pass up.

“[Being close to family] was definitely one of the factors,” he said. “I think anyone who’s around high school athletics knows the job of an AD in terms of hours is very unconventional, sort of all over the place. So being closer to home and being able to, if need be, run home before a night game or after the day is over still make it to their evening practice or performance at school or whatever it might be, being so close is definitely a nice benefit.”

Cormier, who grew up in Rockland, has undergraduate and graduate degrees from Boston University. He started teaching at Norwood in 2004, became a boys basketball assistant coach, then took over as head coach, compiling a 78-115 record with four state tournament berths in nine seasons. In his final season the Mustangs went 15-7 and won the Bay State Conference Herget Division for the first time since 2001. He also had stints coaching girls volleyball and baseball.

Cormier said he has some familiarity with the Hillers from his past coaching and administrative work and was impressed with what he saw and heard.

“The reputation is almost unmatched in terms of its academic reputation as well as its athletics,” he said. “It seems like they have a team in the state championship or in the final rounds every season. So certainly just through reputation I know quite a bit.”

His wife also offered a positive assessment of HHS after her first year in the History and Social Sciences Department.

“She speaks very highly of the students, the staff, the administration,” he said. “I have a lot to learn, and I don’t know many people in Hopkinton in terms of coaching staffs and families and students. But certainly the reputation, I’m pretty familiar with the school and the Tri-Valley League.

“I feel like I have a decent handle on what a great place this is, and I’m looking forward to it.”

Cormier said his initial goal is to get to know as many people as possible — from students, coaches and boosters to administrators who deal with the athletic facilities.

He plans to take what he’s learned in his previous stints and figure out the rest on the job.

“I’ve learned so much from everybody both at Norwood and Foxboro and I hope to bring those lessons here to Hopkinton and just try to be as organized as I can,” he said. “If I can boil the job down to two goals for me it’s to make sure that students have a great experience and make sure coaches are able to focus on coaching, and I’ll take care of the rest.”