Group has competitive side but also community focused 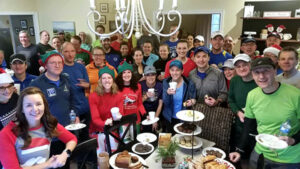 Individuals from the Hopkinton Running Club enjoy a meal at a member’s home after one of the group’s hosted runs.

Hurricane or heat wave, freezing or fair, members of the Hopkinton Running Club have trekked through the elements every Saturday for the past 16 years, since the HRC’s founding in 2003.

While it is a club with many serious runners, the HRC also represents community building, a plethora of worthy causes and a welcoming atmosphere for runners of various abilities and experience.

HRC members proudly lay claim to having helped raise an enormous amount of funds for numerous causes, usually via races in town and sometimes at larger regional or national events as well.

“Michelle Kinsella raises hundreds of thousands of dollars for the Semper Fi Fund,” HRC president Jill Shugart said. “Some of these people that run for the Boston Marathon, for example, you have to raise anywhere between ($5,000) to $10,000 for charity to run it and so many of these members do it year after year and raise all this money for these great causes.”

One race in particular, the Sharon Timlin Memorial Event, highlights the efforts of the HRC, as many members are on the organizing committee and have helped raise well over $1 million for ALS research since the race’s inception in 2004.

The Timlin race also is part of another HRC program that encourages people to take up the sport.

“In April the club does a Couch to 5K program and the idea is that it’s a 10-week program and it culminates with the Timlin race,” said founding member and former president Laura McKenzie. “The idea really is to get new runners, to help them, get them involved in running. When they join the Couch to 5K they are also members of the club, so the idea is that we keep them and they continue to run with the club. It’s definitely for all paces, all abilities.”

The group also puts on the Hopkin10K in December, held in memory of former member Andy Welzel. The race helps raise funds to support two $2,500 scholarships that the HRC presents to graduating Hopkinton High School students.

“I think [starting the scholarship program] was one of the most special moments for us,” McKenzie said.

The club has about 250 members hailing from Hopkinton and neighboring towns.

“We have a lot of people from Milford, Westborough, Southborough, Marlborough — all over,” Shugart said.

For anyone skeptical of joining the HRC, the current president notes she was apprehensive when she first joined.

“I was very nervous to join the club because I did not think I was a great runner,” Shugart said. “I didn’t go super fast and I wasn’t running marathons back then. So I was very intimidated to actually start running with the club. Then I went to a few of the Saturday morning runs and I met all these different people who are running at all different kinds of paces. It was so welcoming that I just really loved it and joined.”

Added member Carly Grant: “Everyone just has their own individual goals, and for some people it’s just to have a more active life. … We’re a really supportive club. We support runners of all levels and we’re really friendly. We’re always welcoming new members. We just really like to stay fit and feel good.”

The Hopkinton Running Club meets every Saturday at 7:30 a.m. at the Town Common except for occasional hosted runs when members provide breakfast at their homes. To join, someone simply has to show up. Members help newcomers find fellow runners who go at their pace. Some HRC members also set up outside runs via the club’s Facebook page.

Shugart gives a simple but important reason for joining the HRC.

“I just always come back from a run happier than when I left,” she said.