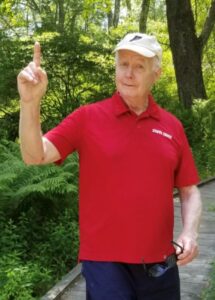 David K. Beck, 67, of Hopkinton passed away at his home as a result of a fall on Sept. 13. Born in Newton, he was the son of William C. Beck Jr. of Gardner and the late Virginia (Shea) Beck.

Dave grew up in Wellesley and Yarmouth. After graduating from Dennis-Yarmouth Regional High School, Dave attended Southeastern Massachusetts University (now UMass Dartmouth). He was a hands-on guy who enjoyed creating things. He worked in the construction industry as a carpenter and in the information technology industry as a system operator, programmer, systems analyst and web designer.

Dave grew up in a close-knit, active family. When family members needed something, Dave was always there. He helped build and remodel homes for his father and his siblings. Family and family gatherings were an important part of Dave’s life. Like his siblings, Dave was very active in sports.

Dave was an avid tennis player and the owner of Silton Tennis in Natick. Over the years he had developed a reputation as an expert in all things tennis. At one point, he strung rackets for the Boston Lobsters. He also strung rackets for other professional tennis players at prestigious tournaments. He was very active in the local tennis scene and developed many great friendships through tennis. He also was an avid kayaker and enjoyed hiking.

Besides his father and his stepmother, Yong Hui Beck, Dave is survived by his siblings, Jerry Beck and wife Judy of Holderness, New Hampshire, Tim Beck and wife Robin of Boothbay, Maine, and Sharon Beck of Hartsville, South Carolina, his sister-in-law, Diana Beck of Hopkinton, and his stepsister, Kathy Zimmerman and husband Tim of Hudson. He also leaves behind many nieces, nephews great-nieces and great-nephews. He is predeceased by brother Steve Beck, who passed away in May.

Visitation will be held on Saturday, Sept. 24, from 10 a.m.-noon at the Chesmore Funeral Home of Hopkinton, 57 Hayden Rowe Street. Visitors are encouraged to share pictures and “Dave stories” after a few prayers at 11 a.m. Interment will be held privately.