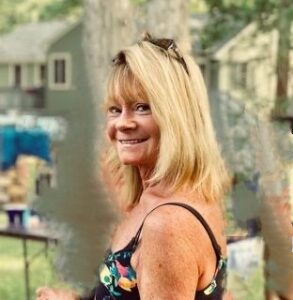 Deborah Anne Nappi (Franks) passed away on May 30 at home. Debbie was born March 2, 1960, in the Chelsea Naval Hospital in Chelsea, daughter of the late William C. and Elizabeth A (Willis) Franks. She grew up in Milford and Hopedale. She graduated Hopedale High School in 1978 and was granted a technical scholarship attending Leo’s Beauty Academy in Worcester, earning a hairdressing license. She became an accomplished hairdresser, working in area shops.  She married Martin Vincent Nappi in 1982 at Sacred Heart of Jesus in Milford. She left hairdressing after five years and went to work for Data General as an administrative assistant until it closed. She gave birth to her son, Thomas Vincent Nappi, in June 1987, and her daughter, Amanda Pamela Nappi, in January 1989. The children attended Milford schools.

In 1992, Debbie went back to school at Newbury Junior College and earned a degree in culinary arts. For nearly two years she was the only female chef at Vidalia’s Restaurant in Milford. In 1998, the family moved to Plaxtol, England, living there for two years as Martin established the European division of a company called Green Hills Software. Debbie was essential in using her skills as an administrative assistant in organizing these efforts while raising her family. They moved back to Milford in 2000, and both children graduated Milford High School. Thomas attended Dean College, where he graduated cum laude with a B.A. in communications, and now is the news director at Hopkinton Community Access & Media (HCAM). Amanda attended Worcester Community College and studied advanced photography.

Debbie was a wonderful mother and a fantastic wife! She excelled at caring for her family and being there in every situation — not to mention the magnificent meals she fed her family every day! Deborah leaves behind her beloved husband of 40 years, Martin Nappi, and son, Thomas Nappi. She was predeceased by her daughter, Amanda Nappi, and leaves behind her three grandchildren, Chloe, Cameron and Colby Nappi, whom she loved dearly! Deborah also leaves behind three sisters, Katherine and husband Frank Trufant of Franklin, Marie McCann of Mendon, and Caroline and husband Gerry Wilson of Hopedale, and one brother, Norman Franks and wife Amy (Phillips) of Hopedale.

She was predeceased by two brothers, William Franks, formerly of Woonsocket, Rhode Island, and John Franks, formerly of Milford. Deborah also leaves behind many nieces and nephews and their extended families as well as numerous friends who loved her dearly. Debbie was known for her kindness, her understanding and her loving ways. She will be missed by everyone who knew her. May her sweet, beautiful soul rest in peace.

Calling hours will be at Consigli Ruggerio Funeral Home, 46 Water Street, Milford, from 5-8 p.m. on Monday, June 6. A funeral Mass will be held on Tuesday, June 7, at 10 a.m. at Sacred Heart of Jesus Church, 187 Hopedale Street, Hopedale, MA.