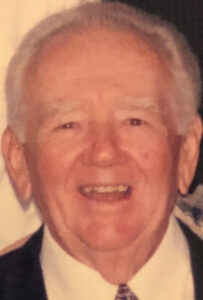 Donald Larson Moberg of Hopkinton passed away on April 4 at the age of 93 after a long and wonderful life. He was born in Worcester on May 13, 1927, to Arthur and Adeline Moberg. He was the beloved husband of Beverly Elian Moberg. The couple celebrated their 69th anniversary on Oct. 14, 2019, before Beverly’s passing in 2020. He was also predeceased by his two brothers, Russell and Paul, and his sister, Marion.

Donald was a graduate of South High School in Worcester and the Progressive School of Photography in New Haven, Connecticut, and he attended Worcester Junior College. He joined the Navy and served in the Pacific during World War II. His last station was Bikini Atoll, a large U.S. atomic bomb testing site. After leaving the Navy, he worked for the New England Telephone Company (now Verizon Communications) as a central office technician. He worked there for 37 years before retiring in 1989.

Donald lived in Grafton for many years before retiring in 1989. Upon retirement, he and Beverly moved to East Sandwich on Cape Cod. They traveled extensively to a number of U.S. states, including Hawaii, and to foreign destinations such as the Caribbean, Scandinavia, Iceland and the Panama Canal. They spent many winters on Marco Island, Florida. He enjoyed photography, hunting, fishing and golfing. But mostly, he enjoyed telling jokes because he loved making those around him happy. He was a member of the Sandwich Friday Men’s Club, the NRA, Sandwich Hollows Golf Course, the Mended Hearts organization, and the First Church of Christ. In 2017, he moved to Golden Pond Assisted Living in Hopkinton.

There will be a celebration of his life on a later date. He will be greatly missed by those who knew and loved him. In lieu of flowers, donations to St. Jude Children’s Research Hospital (501 St. Jude Place, Memphis, TN 38105) would be appreciated.