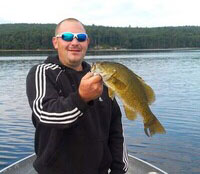 Eddie was an incredibly talented and respected stone mason. He had a huge personality and voice with an infectious laugh. More than anything he loved to fish and be outdoors. He was an animal lover of all kinds and had a gentle heart. He loved his New England sports teams, especially the Patriots. He was a skilled darts player and played in many leagues.

Ed grew up and went to schools in Burrillville, Rhode Island, and then as an adult lived in Hopkinton and Uxbridge as well as Burrillville.

Ed is survived by his mother, Karen Palinkas of Southbridge, and his father, Stephen Palinkas and wife Camellia of Uxbridge, as well as sister Jennifer and husband William Merchant of Florida and Rhode Island, sister Nichole Palinkas of Rhode Island, adored nephews Jacob, Tyler, Gunner and Sloane Merchant, all of Rhode Island, paternal grandmother Mary Grega of Hopkinton, and many dear aunts, uncles and cousins.

Services are private and under the direction of the Matarese Funeral Home in Ashland.

In lieu of flowers, donations in Ed’s name may be made to Keeping Kids Fishing, 37B Meeting St., Coventry, RI 02816 (list Ed Palinkas in the memo line).