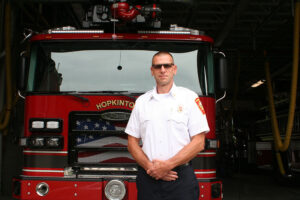 Bill Miller was approved by the Select Board as the town’s new fire chief. PHOTO/JERRY SPAR

At Tuesday’s Select Board meeting, Bill Miller was unanimously approved to be the town’s next fire chief, pending successful contract negotiations.

Miller, who has served as deputy fire chief the past five years, received the recommendation of outgoing Fire Chief Steve Slaman, who appeared at Town Hall in support of his successor.

“I’ve really enjoyed working with Bill as my deputy chief for the last five years,” Slaman said. “Part of what I’ve done as the chief is built the plan for the growth of our department, and Bill has sustained five years of my relentless organization of that plan. I think when Maria [Casey, Human Resources director] read the aspects of the posting, Bill worked on every single one of those areas for five years for me. He did it in certain pieces, and it’s all really come together in the last year-and-a-half.

“I think COVID was almost a blessing in his development because I really needed to pivot a little bit to work with the Board of Health and to work on the town as a whole in emergency management. I literally just turned to Bill and said, ‘You need to keep the operations of the Fire Department going, the human resources of the Fire Department going.’ All the documents I had written in the last couple of years I showed him and said, ‘These are our goals, this is the direction.’ I was very tough on him, because being a fire chief is a tough job. There’s a lot of challenges, you’ve got to work hard, and people are demanding, and that’s good. That’s what we’re supposed to do.

“So I’m very excited that he’s now in this position and he’s built the background that it takes to take this job on. And I’m very happy to say you’ve got a really good candidate in front of you.”

Miller grew up in Oxford and started his firefighting career there in 1986, staying eight years before a six-year stint with the Southbridge Fire Department. Miller has been with the Hopkinton Fire Department since 2000, starting as a firefighter and rising to deputy chief in 2016. He also has served as an instructor and in other administrative roles for the Massachusetts Firefighting Academy in Stow since 1998.

“Chief Slaman has pushed me to, as he said, limits that one person didn’t think they could go to, but it was all for the better,” Miller said. “Working with this community, the love for this community is unbelievable. Just to be part of it is an honor, and to be moved up is an honor, too.”

“This is a job that you are laterally stepping into as a promotion,” he said. “You have done it with pride, you have done it with class and with dignity. Knowing you for 22 years, I can’t imagine the amount of anxiety and angst you have, sitting there right now. You are exactly what our town needs. You’re smart, you’re vibrant, you’re energetic. You know the fire service inside and out. You were trained by the best, and you will take all the great points that Chief Slaman brought and turn this department into your own.”

Tedstone also read a letter from Bob Bartlett, a former deputy fire chief and longtime member of the Fire Department who now lives in New Hampshire.

“As my career in the Fire Department was winding down, along came a professional firefighter to the town who displayed exemplary knowledge and skills in all aspects of firefighting, teamwork and willingness to share his wealth of knowledge with others,” Bartlett wrote. “In particular, Bill spent a great deal of time teaching newer firefighters basic and advanced skills, the importance of working closely together and how rewarding the job can be in serving the public in their time of need.

“On many occasions I worked with Bill in emergency and non-emergency situations where he was in total control at all times, keeping everyone calm and collected. Not an easy feat in such stressful situations. There’s no doubt that Bill Miller will serve superbly in the fire chief position in Hopkinton. All townspeople as well as partners in the fire and emergency services far and wide will be well-served by his appointment to the position.”

The board also took some time to laud Slaman for his efforts in his five years as chief.

“I already have said often that we saw you all the time and the way that you invested yourself professionally and personally in all aspects of the town is so admirable,” Select Board Member Muriel Kramer said. “I also want to say the way — the way — you did the job is exemplary. You really, really, really set the gold standard for leadership in this town. That’s about as big as it gets for me. I’ve been very impressed and very gratified as a taxpayer and a resident to see you doing this job, and you have done it flawlessly. We’re really going to miss you.”

Added Member Mary Jo LaFreniere: “You have been one class act. Thanks.”