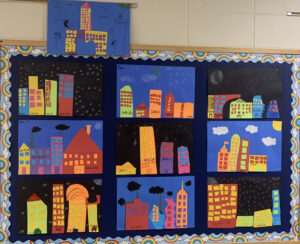 “A picture is worth a thousand words” is an adage that explains myriad ideas that can enter people’s minds while looking at art.

Shelly Moran, the math coach for the Hopkinton Public Schools, has been figuring out creative ways to engage young learners in arithmetic concepts. Recently, several students at Elmwood School created art projects that explored their knowledge of multiplying numbers.

“I think the teachers are thriving on the ability to have this flexibility to create interesting opportunities for the students,” Moran explained. “Although we have a curriculum, there are limited opportunities in the program for divergent thinking. The teachers want to make it fun, interesting and engaging for the kids — and relevant.”

She added that teachers, in addition to using the curriculum, “have a responsibility to make math come alive” for their pupils and to see its application in everyday life.

One of the projects was to have students create a series of buildings, using the windows to demonstrate their knowledge of numbers. They learned about the concepts of height and width.

Using different dimensions at an early age can lead to the later exploration of careers in architecture or engineering, Moran noted.

“You could see that the kids were having fun,” Moran said. “This is what you don’t get to see on a worksheet. You could see where some kids were more fluent with their facts, while others were learning. It actually could be used as an assessment tool.” 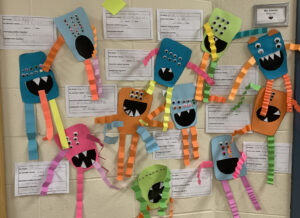 She noted that students are pointing out things they see in their daily lives that involve math, such as the price of gasoline rising.

Several Elmwood students in the classes of third-grade teachers Laura O’Malley and Kristin Conroy spoke to the Independent about their experiences via a Zoom interview.

“I find that when I integrate art into math lessons, student engagement increases and it gives them an opportunity to let their creativity shine,” O’Malley said as she introduced the students.

“My teacher taught multiplication facts in a really fun way by doing art, which is one of my favorite things,” Sireesha said. She especially enjoyed the array cities, where she could add as many windows as she wanted to show her knowledge.

“It’s really fun because it’s combining two things that a lot of kids like together,” said Noelle.

“We make the projects because it’s combining fun and learning at the same time,” added Breyden. “We made our own cities and then made doors and windows.”

“We also did arrays with monsters,” Connor explained. “And then we used googly eyes to count.”

Mary made a monster with a pink and light pink pattern.

Willow added that her monster named Lulu had a pink body.

“She had really cool eyes,” she said. “It was good to create art and be learning at the same time.” 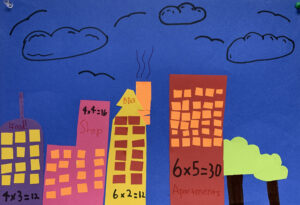 “I did a monster that had five eyes,” said Olivia. She also included a column with the number 6 to demonstrate 6×5=30.

“I really like my array city,” Varoon added. “I had Gillette Stadium and the Empire State Building. I thought we were just going to do math, but we were able to have art.”

“I just love how you can have fun and use math at the same time,” Katelyn said as she described her monster project.

“The monsters got to look silly because we could add on a lot of eyes,” he said. “Once you put the eyes on, you can keep on adding and make a bigger array.” 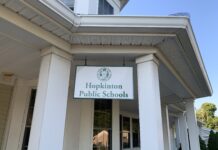 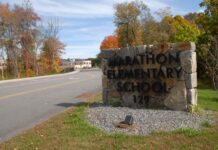 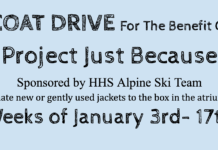