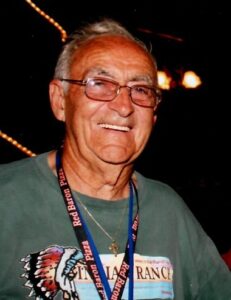 Ellery Taft, 93, of Hopkinton passed away on May 6. He was the husband of Madeline L. (Simmons) Taft, who died in 2009. Ellery was a WWII Navy veteran. He joined the Navy in 1945 and had his first job working in the kitchen. From there he worked at the former Draper Corporation as a crane operator for 27 years. His career continued for another 25 years at H.A. Fafard Construction before retiring.

Ellery was born March 5, 1927, in Woonsocket, Rhode Island, to the late Norman B. and Eva (Toomey) Taft. He was a graduate of Blackstone High School class of 1945. He met Madeline, the love of his life, in 1947. She was a singer and he was instantly smitten with her. They were married March 27, 1948. They spent the next 60 years never far from one another’s side. Ellery was a member of the American Legion, Brothers of the Brush, and the Lions Club as well as an auxiliary fireman for the town of Mendon. He was a long-time resident of Mendon before moving in 1991 to Webster, where he and Madeline spent their summers listening to their favorite music being played on the stage at Indian Ranch. They wintered at their home in Holiday, Florida, where they enjoyed spending time with family and friends who lived there. For many years he and Madeline traveled with the change of seasons.

Ellery was the kindest and funniest father, grandfather, great-grandfather and great-great-grandfather anyone could ever ask for. He made his family feel special and loved. He was truly the light in their lives. He was loved by locals and country-western celebrities alike. Up and down the East Coast you will find someone who knows the name Ellery Taft. This was of no surprise to his family. He was a personal friend to Charlie Daniels and eagerly awaited his arrival to Indian Ranch each summer.

He is survived by his children, Robert N. Taft of Florida, Richard E. Taft and his wife, Tammy, of Framingham, Michael F. Taft of Upton, Kathleen E. Kyral and her husband, Larry, of Arkansas, Susan L. Webster of Milford, and Karen L. Phillips of Hopkinton, 12 grandchildren, 23 great-grandchildren and two great-great-grandchildren. He was predeceased by his daughter, Candace Stanish, and his siblings, David Taft and Eleanor Mellor.

Ellery’s last wish was to be with the people he loved. He spent his final days surrounded by his loving family at his daughter’s home in Hopkinton.

Let your soul fly free to heaven, where you will meet your Mom for the first time and be reunited with your loves Madeline and Candace.

A private graveside service was to be held at Swan Dale Cemetery, Mendon. Services are under the care of the Burma Funeral Home.

Memorial donations may be made to Seasons Hospice, 1 Edgewater Drive, Suite 103, Norwood, MA 02062.