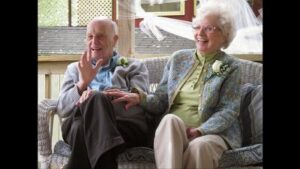 Roger E. Corey, born March 16, 1921, and Dorothy (Haywood) Corey, born Dec. 22, 1916, first met in the spring of 1944 while both were stationed in West Palm Beach, Florida, with the Army Air Corps. Roger served as a radar specialist and Dorothy as a cryptographer. If asked, she had to tell folks she was a secretary, even though she helped tend the SIGABA machine, which decoders called “the baby” They dated for three months, married Sept. 2, and were inseparable for 75 years.

Roger grew up in Central Massachusetts and Dot (as she was called), in Candor, North Carolina, on a peach farm. Before they met, Roger attended Worcester Polytechnic Institute and Dot went to Meredith College, taught school and coached basketball. After the war they returned to Massachusetts, where Roger worked at the Raytheon Corporation and then the New England Telephone Company. Dot became a devoted wife and mother, an avid gardener and an active member of the First Baptist Church in Westwood, where they were long-time residents.

Keeping decades of diaries, they typed their memoirs and shared a lifetime of keepsakes, always including handwritten notes so that family might learn and remember their stories. Among those stories, Dot recalled itching from the peach fuzz during harvest and their many dogs — all named Shep! She told of how she and her sister played barefoot over a precarious gold mine shaft nearby, and of the woman who helped her find a blue dress for her wartime wedding. Roger told of Worcester streetcars and Springfield horseshoe courts, of hunting with his father for food during the Depression, and of his Morse code/ham radio community from old states, like Rhodesia and the Kingdom of Siam. He also vividly recalled his first sighting of Dot, describing her copper hair, bright green dress and shapely figure! Always loving, noble and humble, they sweetly shrugged whenever anyone marveled at the improbable journey of their lives.

Incredible parents, they dearly loved their family. Three sons, David of Shaftsbury, Vermont, James of Southborough, and John of Hopkinton, their sons’ wives, Mary, Yola and Kris, their five grandchildren and their spouses, David and Rebekah, Jeffrey and Stephanie, Sarah and Todd, Danielle and David, and Michael, their six great-grandchildren, Lane, Luke, Eden, Micah, Liam and Wren, and many relatives and friends survive them. They will be greatly missed.

Donations may be made in their memory to either the First Baptist Church or the South Shore Habitat for Humanity, both in Westwood. A celebration of their lives will be scheduled as circumstances allow. Services are under the care of the Folsom Funeral Service.