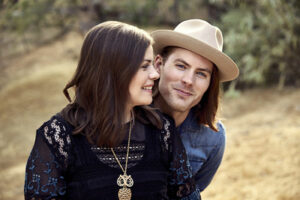 Bryan and Sarah Vanderpool are the Well Pennies.

Former Hopkinton resident Bryan Vanderpool and his wife, Sarah, known as the Well Pennies, are traveling through the United States and Canada performing their uplifting folk-pop music. However, it’s their show on Oct. 12 at the Amazing Things Art Center in Framingham that holds special significance for them. Though they’ve relocated from Boston to Los Angeles to Des Moines, Iowa, where they currently reside, the Amazing Things Art Center is where their journey began.

When Bryan first met Sarah, they were both solo artists, performing in venues in the Metrowest/Boston area.

“We would play open mics any night we had free, and it was such a great experience to meet all these people and try out new songs,” Vanderpool said. “And when Sarah and I started writing music together, it just clicked. We could write songs pretty easily, and our voices harmonized really well.”

Added Vanderpool: “When we first started doing open mics in the area, our absolute favorite was the Thursday open mic at the Amazing Things Art Center. It was super supportive group of artists and it really helped us learn to write and perform.” 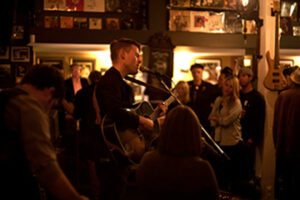 Bryan Vanderpool got his start in music as a student in Hopkinton.

The performance will be made even more special when Dan Cloutier, who was the host of the open mics when Bryan and Sarah were just starting out, joins them to host again.

Although the couple moved to Los Angeles after forming the Well Pennies, Vanderpool said New England was a great place to develop as an artist, and as a graduate of Hopkinton High in 2005, he credits the music education he got in middle and high school with developing him into the musician he is now.

“When I was younger I was doing almost all drums … and on the side I was learning to play  guitar. And when I was  in high school, that was some of the really influential years with learning  the recording equipment,” Vanderpool said.

He credits music teachers Craig Hay and Steve Yavarow (who retired in 2014) with helping develop his skills both as a musician and producer.

The Well Pennies are influenced by 1960s and ’70s folk and pop artists such as James Taylor, Carole King and the Carpenters, but the move to Los Angeles helped define their sound.

“LA certainly has its own sound, it’s a very polished, pop sound. And when came in with a New England folk sound, we created a folk-pop combination,” Vanderpool said.

Looking to travel more and create their own music studio, something they were unable to do in Los Angeles, the couple sought a new home after eight years in California.

“Sarah grew up in Des Moines, and when we took a small trip to visit her parents we fell in love with the place,” Vanderpool recalled. “It has a really supportive community of artists that very much reminds me of New England.”

They opened their own recording facility, called Golden Bear Studio. This allows the couple to record their own songs, as well as work with other artists to produce their music.

“Sarah and I are very much producers as much as we are musicians,” Vanderpool said. “Some musicians we work with just a song and guitar and don’t know a lot about the recording process, so the production aspect is definitely one of our favorite parts of creating music.”

Their most recent album, “Murmurations,” released earlier this year, is mainly influenced by their move to Iowa and the excitement that comes with a major change.

“With the move from LA to Des Moines we wanted a fresh start,” Vanderpool said. “The atmosphere in LA has a dog-eat-dog mentality … so our first song on the new album called ‘Ooh La La’ was almost  a way to cheer ourselves up from the cynical attitude that you sometimes get sucked into in LA.”

One of the unique aspects Bryan and Sarah have incorporated into some of their live performances is playing with youth orchestra and string programs.

The idea started when they were producing music with string arrangements (using instruments such as the violin and cello) together with the band’s violin player, Tim Weed, who also was a band director at a school.

“We got really excited about this idea of performing these songs with students … so on our next show, which was in Anchorage, Alaska, we invited the Anchorage Youth Orchestra to join us on stage. Luckily the music director there was excited about the idea and the whole thing came out perfectly,” Vanderpool said.

They began partnering with youth orchestras about three years ago, and it continues to be an ongoing project, performing with the groups in venues that would be adequate for the performance.

“We like to say every person in the band is a product of music education, everybody came out from jazz bands and pit bands [theatre orchestra],” Vanderpool said. “It’s very important to us, everybody had an influential music director growing up, so those shows are very special to us.”