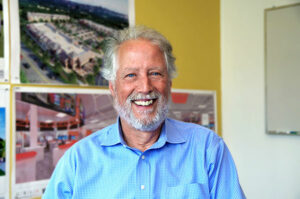 Environmental advocacy has always been a passion for Richardson, and it’s what led him to attend a climate reality conference hosted by Al Gore along with other environmental advocates and scientists a few months ago.

The conference is a three-day event that teaches the attendees the science and impact of climate change, what communities around the world are doing to combat it, and strategies in  creating a grass-level movement to get people engaged. The conference is free, with attendees only having to pay for their travel and lodging.

It’s with this information Richardson learned that prompted him to host a discussion at the Hopkinton Public Library on Sept. 19, talking about the effects of climate change and actions to take, from communities to individuals themselves.

In Richardson’s presentation,  he mentioned the rising temperatures that are being felt around the globe. According to data analyzed by both the National Oceanic and Atmospheric Administration (NOAA) and NASA, it was concluded that July was the hottest month on Earth compared to any other month in NOAA’s database, going as far back as 1880.

The culprit of these rising temperatures, Richardson said, is a combination of carbon dioxide (CO2) pollution and deforestation. Citing information from the National Climate Data Center, Richardson said 62 percent of CO2 pollution comes from fossil fuels.

Richardson said with all the evidence and consensus from scientists that man-made pollution causes climate change, “it’s frustrating to see” skepticism that climate change is a legitimate threat to life. However, he’s also “noticed people, particularly the younger generation, be more engaged, so we’re heading in the right direction.”

Energy sustainability has been important for Richardson, who co-founded Gorman Richardson Lewis Architects (GRLA) in 1976.

Located in Hopkinton, GRLA and Richardson’s mission has been to provide sustainable design strategies. The company signed a pact with the American Institute of Architects to create all new buildings carbon neutral by 2030.

Richardson said renewable energy has grown all over the globe compared to when he first started, with countries and communities investing heavily in solar.

“When we first began doing solar energy projects for homes in the ’70s, the cost for cells that convert sunlight to electricity was around $78 per watt. Now it’s down to 40 cents, making it a lot more accessible,” he explained.

The discussion Richardson hosted was held the day before the “climate strike” protest, where protests were held in Worcester and Boston as well as around the globe to bring awareness to the dangers of climate change. The climate strike protest was made in preparation for the United Nations Climate Summit, held Sept. 23.

Richardson said that although the task to reduce our pollution may seem daunting, there are things we can do on an individual level to help, such as reducing our use of air conditioners, creating less food waste and reducing the use of plastics.

“It starts at the grass-roots level,” Richardson said, noting it’s important to have voices heard at the state and local government level.

“In the end, do we want our kids or our grandchildren to say to us, ‘Why didn’t you act,’ or, ‘You saw it happening and you started to turn things around,’ ” Richardson said.