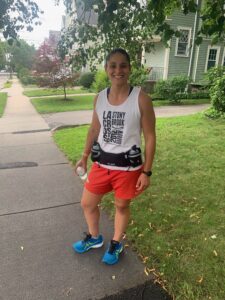 Jaclyn Chirco, who had a standout career as a lacrosse goalie at Hopkinton High School and Assumption College, will run the Boston Marathon as a fundraiser for Hopkinton Girls Youth Lacrosse.

When she was a goaltender on the Hopkinton High School lacrosse team, Jaclyn Chirco was very successful at protecting the goal.

As an adult, Chirco is focused on a different goal — completing the Oct. 11 Boston Marathon. Chirco will run as a fundraiser for Hopkinton Girls Youth Lacrosse.

“Growing up, I watched the Marathon start every year,” she recalled. “My family used to live in the first quarter-mile of the race, so we’d walk to the end of the street and set up camp. We’d bring chairs and coolers and hang out all day long watching the runners go by.

“One year, when I was about 5 or so, we were standing out there and I had my hand out, just looking to get a high-five, and this one guy handed me a $10 bill. So I’m thinking I might have to pay it back this year to some kid on the sideline,” she added with a laugh.

While her connection to Hopkinton makes the race special for Chirco, it’s ultimately her bond to the town’s lacrosse program that solidified her decision to run.

Chirco began her lacrosse journey in third grade and developed into a three-year varsity starter in high school. In 2011, her first year as a starter, the team won the Division 2 state championship. She went on to become a Tri-Valley League All-Star and, as a senior in 2013, team captain.

Chirco then had a stellar career at Assumption College, starting every game in net all four years. As a senior in 2017, after finishing second in the league in saves and helping her team to an NCAA tournament appearance, she earned Northeast-10 Conference and Intercollegiate Women’s Lacrosse Coaches Association All-Region honors. She finished her career as the active NCAA Division 2 leader in saves (606) and fourth in games played as a goalie (68).

She then played professionally for two seasons in the now-defunct United Women’s Lacrosse League for the Boston Storm.

Chirco, who works as general manager of Resilience Fitness on South Street, now looks to give back to the program that propelled her.

Chirco views HGYL as a pivotal pillar in her development, both as an athlete and a person.

“I wouldn’t have been anywhere without that youth program building from the ground up,” she said.

Now Chirco is advocating for the program that was such a positive influence for her.

“I just feel very strongly about youth lacrosse because of where it brought me. So I know where it could bring other girls in Hopkinton,” she said. “I started in third grade, which was the youngest age you could start lacrosse at the time. I remember a lot of youth days. They were just so much fun.

As Chirco aged, her enjoyment of the sport continued.

“Some of my fondest memories come from middle school and high school when I started playing for the varsity team,” she said. “Some of my best friends played with me, and that was such a great experience through high school.”

Chirco also views Hopkinton lacrosse as an experience that taught her meaningful values.

“One of the biggest lessons you’ll learn is teamwork,” she said. “Even as a goalie, it’s not just you. It’s you and a bunch of other girls, and you all want the same thing. You want to win the game, and everyone has a different job to get there.

“But while those jobs are different, you’ve got to work together to get it done. I definitely took that with me through college and pro, and I still use that in my everyday life.”

While she has experience in shorter races, Chirco will be running her first marathon, hoping to inspire the next generation of lacrosse players.

“I just really know how important the program is, how valuable it is for the girls to have the best experience possible,” she said. “It’s crucial to cultivate and grow these youth programs.”