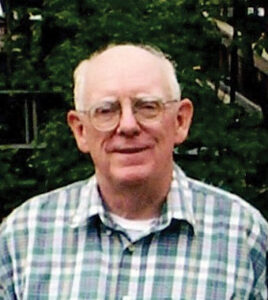 George F. Gross, 86, of Hopkinton passed away Feb. 28. Born in Boston, he was the son of the late Gertrude (Dame) and George H. Gross.

George is survived by three children, Carol Ann Falk and her husband, Michael, Christopher Gross, and Patrick Gross and his wife, Maria, and his siblings, Gertrude Creedon, Florence Tower, and Joan Whittaker and her husband, Jack. He also leaves behind his sweetie, Shirley Barrows, eight grandchildren, Kati, Alex, Cameron, Jordyn, Jaidyn, Agnella, Marissa and Devin, as well as many nieces and nephews. He is predeceased by siblings Frank Gross, Virginia Gross and Theresa Gillis.

A funeral mass was celebrated March 4 at St. John the Evangelist Church in Hopkinton, followed by burial in Evergreen Cemetery, Hopkinton. Services were under the care of the Chesmore Funeral Home (ChesmoreFuneralHome.com). In lieu of flowers, donations may be made to Alzheimer’s Association at alz.org.