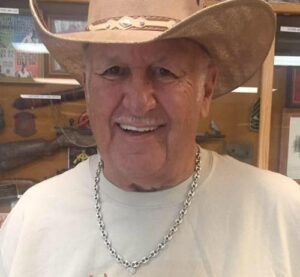 Gerald “Gerry” Brodeur, age 82, a 29-year resident of Nevada, passed away at home March 13 after a lengthy battle with cancer. Gerry was born in Hopkinton, to the late George and Ruth Brodeur. He is survived by brothers George and Joe and sister Susan Dubois.

He is predeceased by his wife of 49 years, Judy, and son Paul. Gerry is survived by his sons,  John and wife Julie of Londonderry, New Hampshire, and TJ and wife Susan of Bend, Oregon. He also leaves behind two grandchildren, Kyle and Nicholas. Gerry also is survived by his devoted companion of 10 years, Patricia Kleri, his neighbor Dawn Farrell, who he considered an adopted daughter, and his beloved dog, Mikey.

Gerry attended Columbia University in New York, where he majored in economics and played football as a guard and center. While at Columbia, Gerald received a commission in the U.S. Marine Corps, completing initial officer training prior to graduation.

Gerry began active duty in the Marines in 1961, serving for 20 years and retiring as a major. His service included combat tours in Vietnam and an advising role during the Yom Kippur War in Israel. His personal decorations include Defense Meritorious Service Medal, Navy Commendation Medals (with valor), and Combat Action Ribbon. While on active duty, Gerry became involved with the Toys for Tots program, something that he continued for the remainder of his life. Gerald was the quintessential Marine, as many of his friends and family will attest.

Following retirement from the Marine Corps, Gerry raised his family in Hawaii, where he worked for several years as a scuba diving instructor and later had a successful career in the electronic security industry. Gerry was a member of Kaneohe Yacht Club, where he served as Port Captain. Gerry and Judy moved in 1992 to Las Vegas, where he continued his career in the  security industry until full retirement. He was a member of the Coast Guard  Auxiliary, served as treasurer of the Las Vegas Toys for Tots, was president of his homeowners association and was an avid golfer.

The family is deeply grateful to the staff at Nathan Adelson Hospice. A celebration of life will be held at a place and date to be determined. His ashes will be scattered in Kaneohe Bay, Hawaii. Memorial donations can be made to the Las Vegas Toys for Tots.